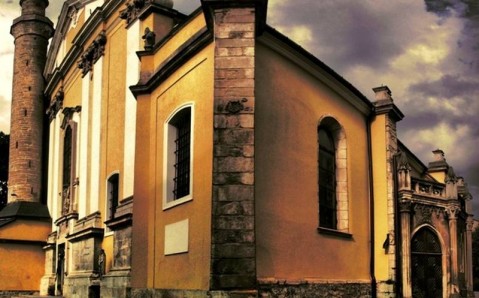 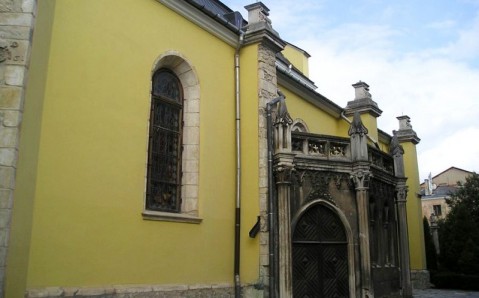 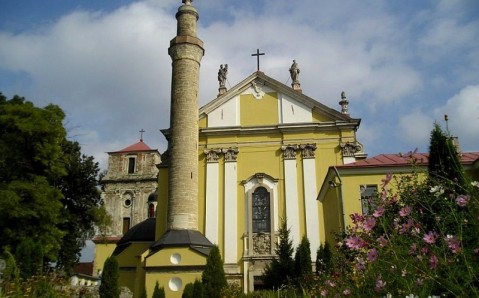 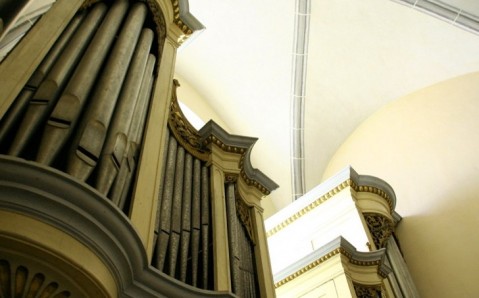 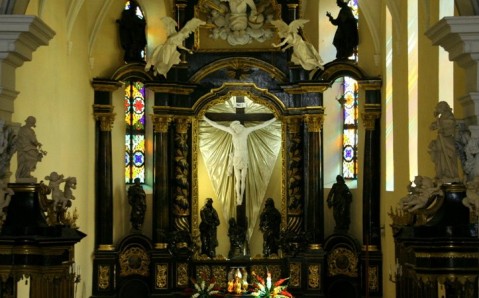 The Cathedral of the Saint Apostles Peter and Pavel

The Cathedral of the Saint Apostles Peter and Pavel is one of the most impressive temples of Kamianets-Podilskyi. Along with the ancient fortress it is one of the most token and attractive sights of the town. The uniqueness of the Peter and Pavel Cathedral complex is not only in the original interweaving of various architectural styles, but in ironic combination of elements of two religious cultures - Christian and Muslim.

In the late 14th century the first catholic temple appeared in Kamianets-Podilskyi. It was built out of wood, and, therefore, stood not for a long time. One and a half centuries later the Poles, who owned the town, raised the stone Catholic Church of the Saint Apostles Peter and Pavel, sustained in the modest Roman style. Later the bell tower and several chapels were added to the cathedral.

In 1672 the Turks, who won over Kamianets-Podilskyi from the Poles, turned the catholic church that used to be the main temple of the town at that time into the mosque and attached a 36-meter high minaret with 145 stone stairs going to its top. 27 years later the Poles won Kamianets-Podilskyi back, they decided, however, to keep the minaret. It served as an ideal pedestal for catholic four-meter high statue of the Mother of God: it personifies Virgin Mary, staying on the crescent and crowned with nimbus with 12 stars.

Over the 18th-19th centuries the Peter and Pavel Cathedral was repeatedly rebuild and reconstructed, and as a result baroque and Neo-Gothic traits were gradually added to its appearance. In 1781 a new element was added to the architectural conglomerate of the temple. This was the baroque gate in form of triumphal arch, built in honor of Polish King Stanislav August's coming to Kamianets-Podilskyi. The arch over the gate is decorated with sculptural composition of four angels, and the figure of the Saint Jan raises in the center. Local residents claim that if you make a wish, when passing under the arch, it'll inevitably come true.

The interior of the cathedral is of particular value. Original stained-glass windows, wooden altar and frescos, created by the genius of Giovanni Sampini, who painted the walls of the church with copies of pictures by popular Italian authors, remained here. The real decoration of the temple is the headstone of Laura - the daughter of Polish Count Karol Pšezdeckiy, - who at the age of 21 fell from the horse and was tragically killed. The amazingly realistic headstone is rightly considered to be the real artwork.

One more gem - and the real treasure of the Catholic Church of the Saint Apostles Peter and Pavel - is its impressive ancient organ, made by Austrian company exclusively for the Kamianets-Podilskyi temple. It is considered to be a great luck to get to the concert of organ music in the church, while such organ is the only one in Ukraine.