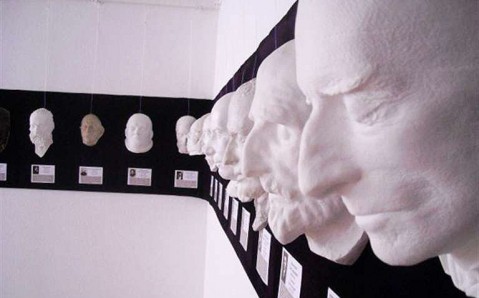 Exhibition of the death masks

The exhibition hall of the Kyiv One Street Museum houses the unique exhibition of the death masks, which will last until October 31st.

The first exhibition of this kind took place in the capital ten years ago. Since then the collection of the One Street Museum was repeatedly enlarged and today numbers about 250 death masks, thanks to which it is considered to be one of the largest in the world.

The exposition includes genuine plaster masks of the world-known personalities. In particular, one can see faces of the British Queen Victoria and her son Prince Leopold, the Austrian Emperor Franz Joseph, the Yugoslav leader Broz Tito, Turkish "father of the nation" Ataturk. In addition, the exhibition presents death masks of philosophers Voltaire and Hegel, writers Hugo, Rilke, Feuchtwanger, Brecht, Mann and Sholokhov, scientists and inventors Mendeleev, Edison, Tesla, as well as composers, filmmakers, silent movie stars and other celebrities.