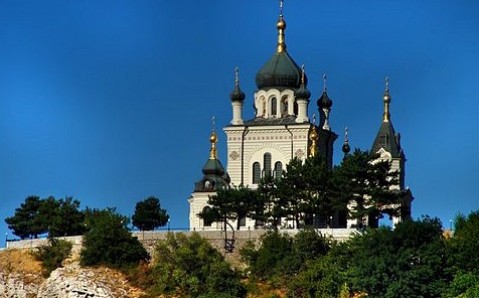 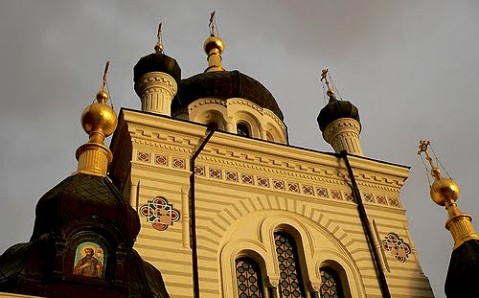 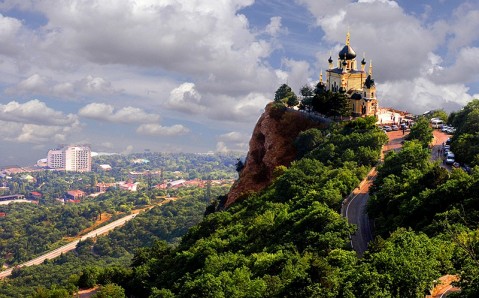 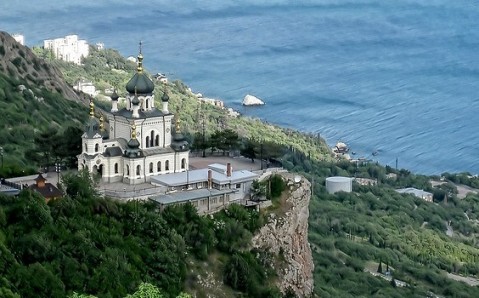 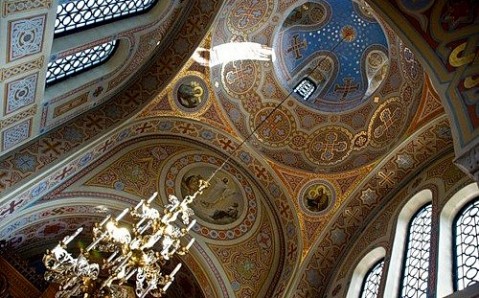 Foros’s Church (the Church of the Resurrection)

Foros is associated with elegant temple, situated on the 400-meter-high cliff and soaring above the sea, probably more often than with its splendid beaches, warm sea and amazing sceneries. It is the Church of the Resurrection, resort’s main symbol and genuine adornment of the Southern Coast of Crimea.

The magnificent temple in Byzantine style was raised in 1892, thanks to the merchant and Maecenas from Moscow Alexander Kuznetsov, who had a manor in Foros. It was he who allocated money on church’s construction to commemorate miraculous rescue of Russian Tsar Alexander III from the train crash that happened on October 17, 1888, when the Imperator with his family traveled to St. Petersburg. The train ran off the rails, but members of the royal family miraculously escaped unharmed.

The elegant light church was raised in Russian wooden temples’ image and likeness and its silhouette was reminiscent of Moscow churches, dated to the 18th century. It had two tiers, crowned by nine domes of different size. Foros’s church’s main facade was adorned by fancy porch with jutting out into the air belfry. Temple’s splendid exterior was supplemented by its rich interior decoration. Floors were tiled with mosaic, manufactured in Italy on special order, and walls were faced with multi-colored marble and painted with frescos by well-known Russian artists. Interior’s highlight was carved oak iconostasis with gilt Holy doors.

However, locals and guests of the Southern Crimea had a chance to admire the amazing church, which was nicknamed as Temple in the Sky due to its unusual location, only for a short period of time. In 1924, the soviet authorities ordered to close the Foros’s temple, pull down gilt crosses from the domes, remelt the bells and paint over the original paintings. The building was long used as a storehouse, and later, a dining hall was situated there. Then, the church was abandoned and neglected for several dozens of years.

In the late 20th century, the unique temple got a status of architectural monument and underwent the first partial restoration. But it wasn’t successful, the same as the following two. Foros’s church was fully reconstructed only in 2004: new copper domes with new shiny gilt crosses were installed, colorful stained-glass windows were inserted, mosaic floor was restored, and pictorial decoration was recreated inside the temple. Renewed church’s adornment is a new carved oak iconostasis, made after old patterns.

An observation platform featuring breathtaking panoramas of the resort and the Black Sea picturesque bays bestrewn below is arranged near the church.

Getting here. Given its location, the Foros’s church is uneasy to reach. Public transportation doesn’t go there. It’s better to take a route bus from Yalta bus station in direction of Sevastopol, get off the bus at the exit of the road leading to Foros, and follow the footpath leading to the temple on the cliff top from there.