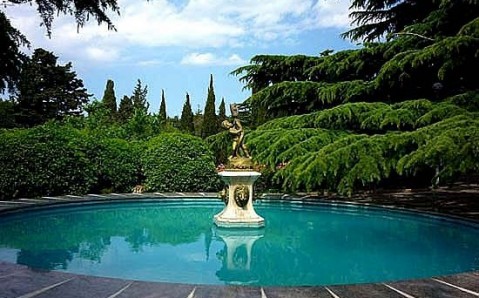 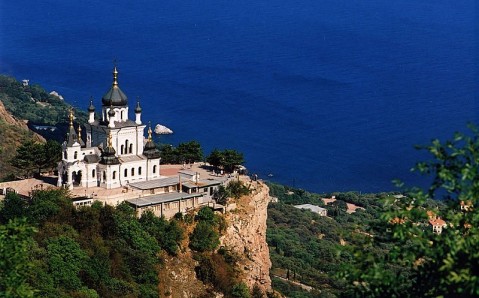 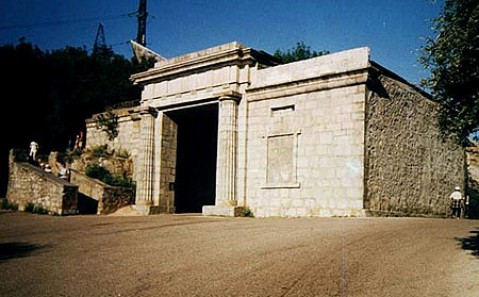 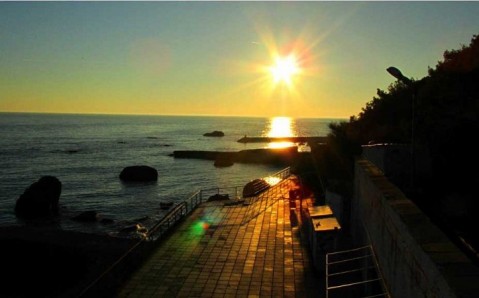 Small resort town Foros acquired wide fame not only thanks to its amazing sceneries, curative climate, warm sea, comfortable beaches and a range of pensions, but also for being the southernmost point of Crimea. Nature generously endowed Foros with its precious riches, and man diluted this marvelously beautiful corner with handmade masterpieces.

Resort's most attractive place is definitely the Forossky Park with its peculiar plants, picturesque glades, motley flowerbeds and elegant bridges. Laid in the late 19th century, it reckons among the best on the Southern Coast. In number and diversity of exotic trees, many of which were brought from different corners of Europe, Asia and America, it competes with the famous Nikitsky Botanical Garden, and in beauty of its landscapes it adequately competes with Vorontsov Park in Alupka.

Visually the Forossky Park is divided in three parts: Lower, or Seaside, Middle and Woodland Park. The Middle part is considered to be the most beautiful. Even its name - the Paradise Corner - speaks for this. In the first place, it amazes with the cascade of six small lakes that form marvelous waterfalls. Bamboo thickets, cedar and oak groves also attract attention. Besides forming unimaginably beautiful sight, local trees create freshness in hot summer days and saturate air with curing aromas.

The Park owes its origin to merchant Alexander Kuznetsov from Moscow. He moved to Foros hoping to rid himself of tuberculosis with the help of local climate. Along with the park, he built a rich manor, whose interiors were decorated by the best experts in applied art. Today the strict building in Russian classicism style is one of Foros's key architectural attractions. Currently manor's building is occupied by one of the resort's main sanatorium's buildings.

Balconies and terraces of merchant's manor open up mind-boggling views over picturesque neighborhood: park, mountains, sea, and elegant temple, soaring above them. It is the Church of the Resurrection - Foros's main symbol. It is set atop the abrupt 400-meter cliff Krasnaya Skala. The magnificent temple in Byzantine style with rich interior appeared here - again - thanks to merchant Kuznetsov. He was the one who allocated money on Church's construction to commemorate miraculous rescue of Russian Tsar Alexander III from the train crash that happened in 1888, when the Imperator with his family traveled to St. Petersburg. The temple is notable for luxurious exterior and picturesque interior.

It is worth ascending the Krasnaya Skala (literally: Red Rock) in order to admire not only the beautiful Foros's Church, but also the breathtaking panoramic view over picturesque bays bestrewn below.

Another resort's sight - the Baydar Gate - stands not far from the temple. It has an arched form and is reminiscent of massive antique portico. The gate was built in 1848, to commemorate the completion of the Yalta-Sevastopol highway. The Baydar Gate attracts not only with its status of architectural monument, but with two observation decks, located on its top. They offer breathtaking view of Foros and of the whole Southern Coast of Crimea.

Foros’s Church (the Church of the Resurrection)