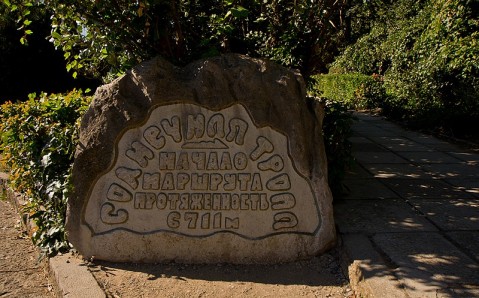 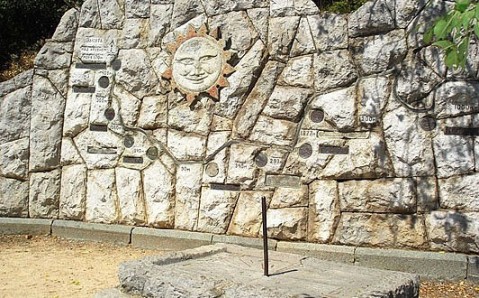 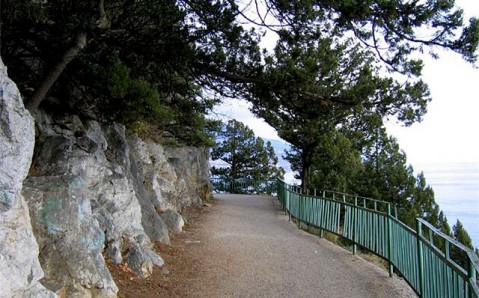 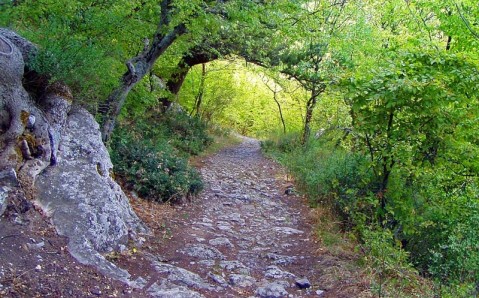 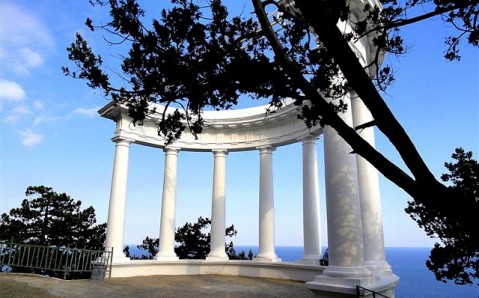 The picturesque Tsar’s Path (Tsarskaya Tropa) is running along the Black Sea shore for almost seven kilometers and is reckoned among the most famous pedestrian trails on the Crimean peninsula. It was called ‘Tsar’s’ because the Russian Imperator Nicholas II and his family members liked walking along it. First of all, the path that links the magnificent Livadia Palace and the former manor of the Grand Prince Alexandr Mikhailovich in Gaspra (now, the Rosa Luxemburg children’s sanatorium) is famous for its amazing mountain and sea sceneries opening at its every turn.

The path appeared in Yalta surroundings in 1843. Back then, it was a lot shorter and linked Livadia and Oreanda. In the year 1861, the Count Lev Pototcki’s mansion passed into ownership of the Russia’s imperial family and was turned into the splendid Livadia Palace. At the same time, it became necessary to link it with the Ai-Todor Cape, on which another Tsar’s manor was situated. 50 years later the path was extended to the settlement Gaspra and was named as Tsar’s.

The pedestrian trail starts on the territory of the very beautiful Livadia Park, laid out almost two hundred years ago. The route scheme and the original solar clock are also located there. The Tsar’s Path is laid on the height of 140 meters above sea level. It passes elegant white rotunda, which towers above dangerous rocks, and runs through the picturesque settlement Oreanda. Then, it passes the Cross Rock (Krestovaya Skala), where the remnants of a medieval settlement are preserved, and several mountain peaks, and finally leads to the astonishingly beautiful park that surrounds the Rosa Luxemburg children’s sanatorium in Gaspra.

The Tsar’s Path has an interesting peculiarity. Despite Yalta’s surroundings’ complex mountain relief, the pedestrian trail is laid virtually on the same level and lacks steep ascents and descents. For this reason, it is often nicknamed as horizontal path. It is adorned by interesting decorative sculptures, exotic trees and bushes. Plates showing the information about passed and remained distance and recreation benches are installed on the trail. The Tsar’s Path intersects with other Livadia’s pedestrian trails, park lanes and walks that lead to sanatoriums and beaches.

A walk along the Tsar’s Path is an opportunity to admire charming Southern Crimea’s landscapes: virtually every turn opens a new inimitable view of the sea and the mountain range, and comfortable observation areas please with impressive panoramas.

Most part of the Tsar’s Path is framed with trees, whose lush crowns close up and form shadow that makes a promenade comfortable even during hot summer days. And the healing mixture of mountain and sea air provides an additional health improving effect. For this reason, the Tsar’s Path is often nicknamed as the Trail of Health. Walking along it is especially recommended to those who have pulmonary conditions.

The Tsar’s Path is sometimes called the Solar Path (Solnechnaya Tropa). This name was given to it during the soviet times and locals still use it.