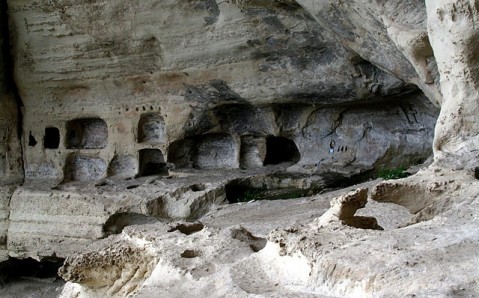 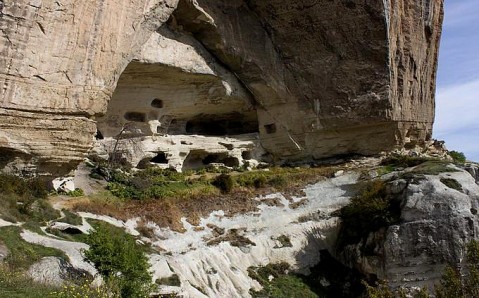 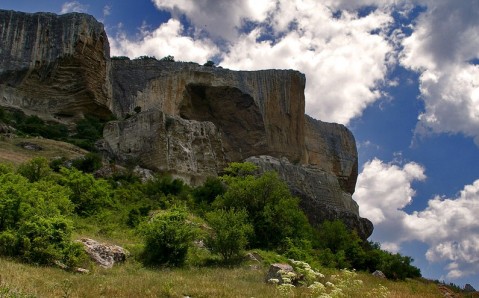 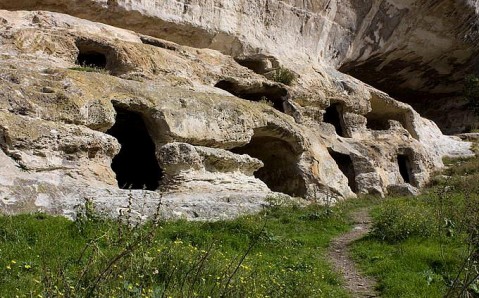 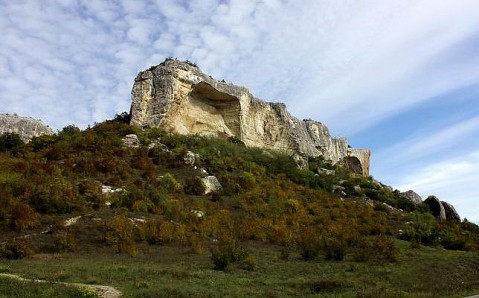 Kachi Kalyon is a medieval cave monastery, situated in the picturesque Kachinskaya Valley in Bakhchysarai surroundings. It stands on the slope of the giant 140-meter-high ivy-covered rock mass, whose bizarre shape resembles a gigantic ship's nose, rushing down the river Kacha. It is often referred to as the Crusade Ship, because of the huge cross, ‘drawn’ on the face of the rock by nature.

Natural grottoes in the huge limestone massif served as a perfect shelter and, therefore, attracted people, who founded their settlements there, since early times. One of those settlements transformed into a fortified shelter over time and historians called it Kachi Kalyon settlement. Its residents engaged in agriculture and wine making. One can still find more than a hundred surviving wine presses there.

Later – in about 7th century – the small Orthodox Monastery of St. Anastasia emerged in a grotto on the right slope of the huge rock. It is said that it was founded by Byzantines, who fled during the iconoclasm to the Crimean peninsula, built monasteries there and brought along their native culture. Over time, the monastery grew and developed: several churches and chapels were opened on its territory.

The cave monastery existed up to the year 1778. Then, Russian Empire’s government announced mass resettlement of Crimean Christians, mostly Greeks, to the Pryazovia (Azov Sea region). In the late 19th century, the monastery revived, but it was closed in 1921. Today, monks live in Kachi Kalyon again. They have built a new modern monastery near the grotto, where medieval small secluded monastery used to stand.

Now, the rock massif stretching for over 500 meters resembles bee's cells: its surface is literally peppered with multi-tier handmade caves, built by Kachi Kalyon’s former residents. Most of them served household purposes, others were monastic cells and churches.

Kachi Kalyon’s five natural grottoes are of great value. The first one is almost completely filled up with stones. It is interesting for the neighboring ruins of medieval defensive wall, built of large limestone blocks, the cave Church of St. Sophia and the winemaking complex with wine press. In addition, the remains of an ancient necropolis and stone gravestones survived there.

The second grotto used to be occupied by the so called monastic dormitory, and the third one housed church mortuary complex. The most notable and grandiose grotto is the fourth one. Its 70-meter high walls resemble a dome of Gothic cathedral. It is there that the Monastery of St. Anastasia and the namesake spring, whose water is considered to be healing, were located. The monastery also occupied a part of the fifth grotto, which is now dilapidated.

Getting here. Take a route bus from Bakhchysarai in direction of the village Sinapnoye. Get off the bus in the village Predushchelnoye or Bashtanovka and then follow a trail to the Kachi Kalyon.