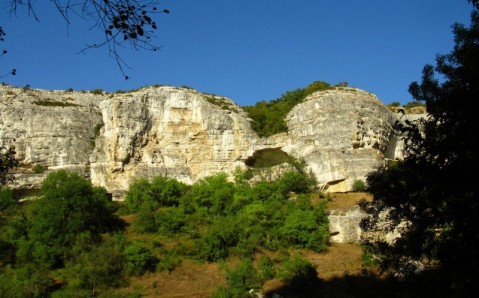 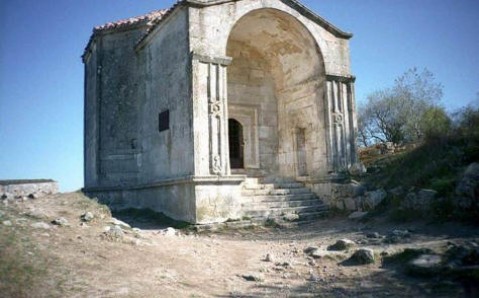 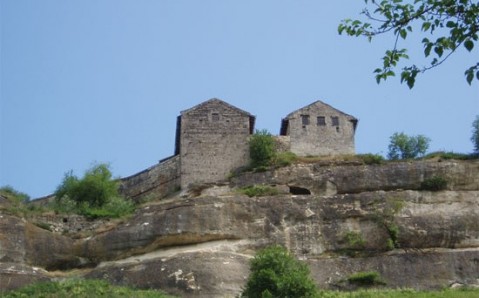 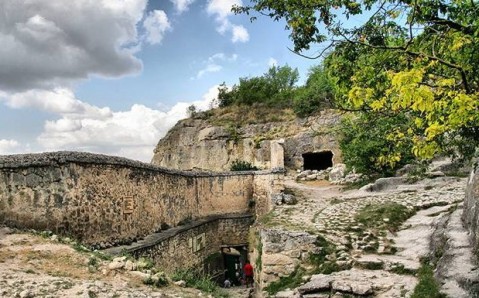 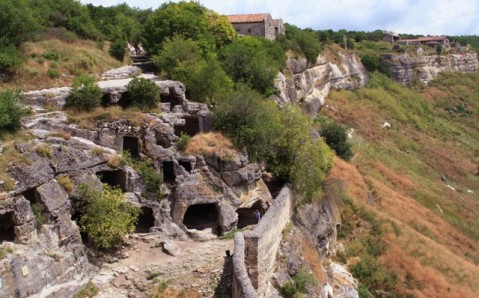 The ‘cavern fortress’ Chufut Kale is one of the most shining and the best-preserved medieval landmarks of the peninsula. It is located near Bakhchisaray (around 3 km, or 2 miles) on a mountain plateau with precipices 1.5 kilometers (1 mile) above sea level. It may be said that nature created this fort, and people have only strengthened and improved its defenses.

To be fair, it should be mentioned that the term ‘cavern fortress’ is not quite correct for Chufut Kale. Its inhabitants lived in regular buildings, while grottos and caves were used as basements. Over time, the ground buildings were ruined, and in place of the medieval town, only caves remained. This is why people call Chufut Kale the ‘cavern fortress.’

Historians are not unanimous on the time of the town’s appearance. Some consider it to have been a fortified settlement on the Byzantine border, founded in the 6th century and called ‘Fuly’ at the time. Others think that Chufut Kale appeared in the 11th century. It is first mentioned in historic documents at the end of the 13th century, as a settlement that was captured and plundered by the Golden Horde’s army. Over the next century, Chufut Kale was occupied by the Karaites.

In the 15th century, Tatars renamed the town Kyrk-Or (meaning ‘forty fortifications’) and made it the capital of the Crimean Khanate. Residences of the first governors and the mint were located here, and the citadel was used as jail for high-ranked prisoners of war. Soon, Bakhchisaray became the capital of the Khanate and the Khan moved there with his court. Almost the entire Muslim population followed him, and only Karaites remained in the town, because they were not allowed to settle in Bakhchisaray. Since those times the town was called Chufut Kale, which means the ‘Jewish Fortress’ (since Karaism is an offshoot of Judaism).

In the 18th century, the Russian army destroyed the fortress and the town lost its significance. Karaites lived here for another century, and, after restrictions on their place of living were lifted, they left Chufut Kale for good.

Nevertheless, a few buildings did remain in the medieval town that interest many of the peninsula’s guests. For example, the mansion of a prominent Karaite scientist and collector of the ancient manuscripts, Abraham Firkovich, is well preserved. Today, there is an exhibition about Karaite culture inside the mansion.

Moreover, you can find around 200 caves that were used by the locals for household and defensive needs. Some caves used to house churches, and today, you can still see remains of ancient frescos in them. There are also remains of a medieval mosque, mausoleum of the Golden Horde Khan’s daughter, built in the 15th century, and two kenasas – Karaites’ prayer houses from 14th century. But the oldest landmarks in Chufut Kale are the wall that crosses the plateau and divides it in two parts, the old and new, and the remains of a few towers. Archeologists have recently discovered a magnificently preserved well on Chufut Kale’s territory.

Getting here. You can take bus №2 from Bakhchisaray to the station ‘Starosel’e’ (‘Old Town’). From there you take a path to Chufut Kale’s Southern gate. You can request a guide for a group of no fewer than 20 people.