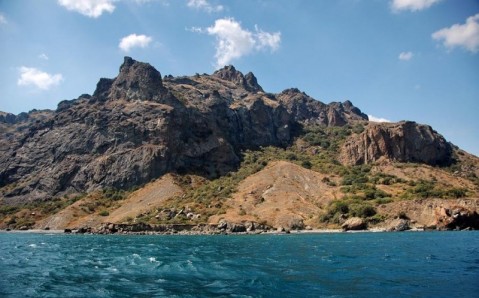 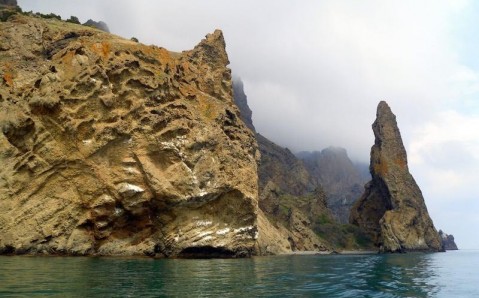 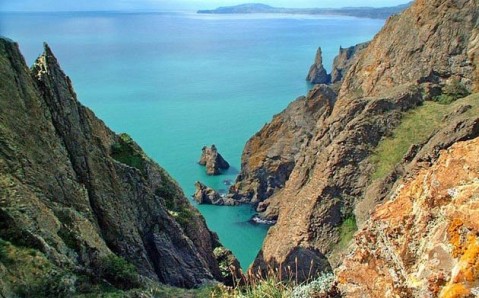 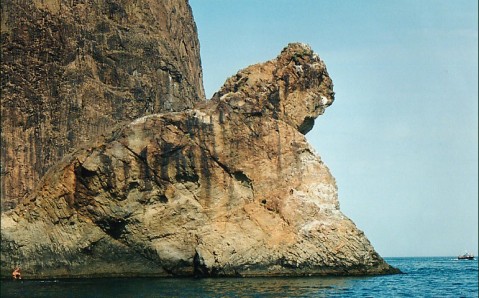 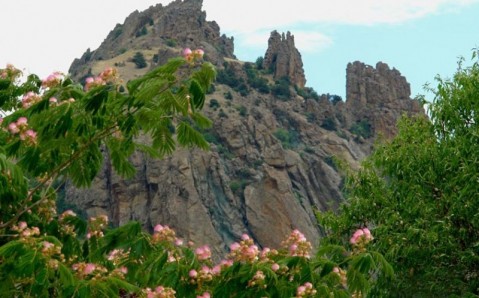 Kara Dag is one of the most amazing wonders on the peninsula, the most beautiful and the most mysterious corner of southeastern Crimea. It is an ancient dead volcano, which was active over 150 million years ago, in the Jurassic period. At that time, according to scientists, it was submerged under water, along with the rest of the peninsula. Kara Dag, in Turkic, means ‘Black Mountain.’

This dark giant boggles the imagination with its greatness and the uniqueness of its shape, created over millions of years by the most hardworking and talented sculptor – nature. Its rocks are speckled with fantastic grottos; at its foot, numerous wondrous bays have formed. Kara Dag’s peaks are decorated with volcanic rocks fancifully shaped by wind, water, and sun. The locals gave the mountains some peculiar names: Devil’s Finger, Ivan-the-Vagabond, Gingerbread Horse, and Throne and Retinue.

Kara Dag’s main tourist attraction is the Golden Gate (previously called the Devil’s Gate). It is a rock standing not far from the shore and cut through by an archway, truly, a gate to Kara Dag. It is made of yellow basalt, and during the day, when the sun shines on it, it glitters like gold, hence its name.

Kara Dag is remarkable not only because of its original landscapes, but also because of it unique flora and fauna, and precious stones. To protect these natural treasures, a reserve was created in 1979 on the territory. It is divided into two areas – one open to public, and the other completely off-limits to visitors.

Two tours are available today for those who wish to visit Kara Dag, one on foot and one by sea. On foot, the excursion lasts 4 hours (7 km, or 4.3 mile, long route) and, beside traveling along the main mountain range, it includes visiting the Nature Museum created in the reserve. The sea tour is a one-hour voyage around Kara Dag (7 km, or 4.3 miles), on which you can admire famous rocks and numerous bays, as well as pass through the Golden Gate. In addition to that, you can visit the dolphinarium and aquarium that are situated on the reserve’s territory.

Getting here. The point nearest to Kara Dag is the settlement Kurortnoye, not far from Feodosiya. But please remember, that visiting is possible only in the form of a guided tour (20-25 persons), which is available for sale either on the reserve, or in tourist offices of Feodosiya, Koktebel, and Sudak.