Mount Koshka • Yalta (102 km.)
The picturesque Mount Koshka towers above the resort settlement Simeiz, 15 kilometers away from Yalta. It is reckoned among the most beautiful landscape monuments on the Southern Coast of Crimea. ‘Koshka’ is a Russian word for ‘cat’ and mountain’s silhouette is indeed reminiscent of an elegant cat that bends before a jump. But in fact, its current name is nothing but reconsidered in Russian way va
more Show on map
Eski Kermen • Bakhchysarai (73 km.)

Eski Kermen • Bakhchysarai (73 km.)
The ancient Eski Kermen is situated on the mountain tableland difficult of access. It is one of the oldest and the most picturesque cave towns in Bakhchysarai surroundings. Due to its imposing age and rare authenticity that allows feeling the atmosphere of antiquity in full, the medieval settlement, whose name means Old Fortress in Tatar, is reckoned among the most frequently visited archeological
more Show on map
Uchan-Su Waterfall • Yalta (98 km.) 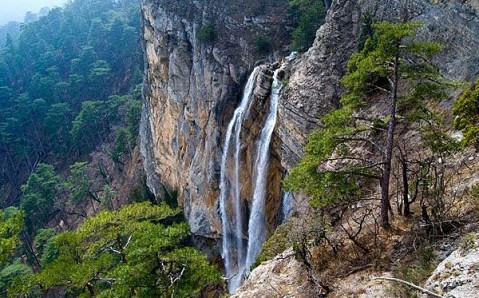 Uchan-Su Waterfall • Yalta (98 km.)
Yalta’s picturesque surroundings conceal many wonders of nature: their concentration per square meter rolls over limit, exceeding all thinkable and unthinkable norms. One of them is majestic waterfall Uchan-Su, located on the southern slope of the beautiful Ai-Petri Mountain. Its name means flying water in Crimean Tatar. It is the highest waterfall not only in Crimea, but in the whole Ukraine as w
more Show on map
Chokrak Lake • Kerch (231 km.) 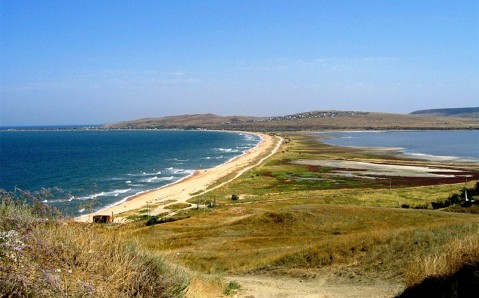 Chokrak Lake • Kerch (231 km.)
The salty Chokrak Lake, situated on the Kerch Peninsula near the village Kurortnoye, is a true natural wonder. It is notable for its unique curative mud, whose composition has no analogues in the world. The mud is formed on the lake’s bottom by hydrosulfuric springs and mud volcanoes, as well as by algae and microorganisms from the sea water, which feeds the lake through a narrow sand and shell ba
more Show on map
Jur-Jur Waterfall • Alushta (98 km.)

Jur-Jur Waterfall • Alushta (98 km.)
The full-flowing Jur-Jur Waterfall, situated in Alushta’s surroundings, in mysterious, densely overgrown with forest Khapkhal ravine, is rightly reckoned among the most beautiful Crimean waterfalls. In addition to being very picturesque, it is notable for being the most powerful waterfall on the peninsula: on the contrary to the majority of its Crimean ‘colleagues,’ Jur-Jur, whose water discharge
more Show on map
Mud Volcanoes • Kerch (245 km.) 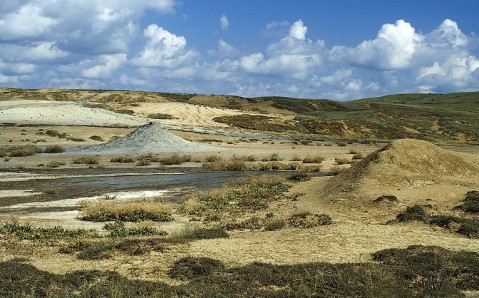 Mud Volcanoes • Kerch (245 km.)
Old Kerch is notable not only for antique ruins, old burial mounds and medieval fortresses, but also for truly unique natural attractions, located in the city’s surroundings. One of them is an amazing mud volcanoes valley, spread out 8 kilometers away from Kerch. Mud volcanoes are a quite rare natural phenomenon and are not as widespread as magmatic ones. Such volcanoes are formed as a result of t
more Show on map
Cape Fiolent • Sevastopol (79 km.)

Cape Fiolent • Sevastopol (79 km.)
Cape Fiolent occupies a special place among Crimean beauties. Its severe rocks that pile up over endless sea surface stretch for several kilometers from Sevastopol to Balaklava. It is one of the most charming and inimitable corners on the Crimean peninsula that captures with beauty of wild nature and never-ending romance. Situated far from south-coastal resorts' noise and fuss, it is the best plac
more Show on map
Cape Aya • Sevastopol (90 km.)

Cape Aya • Sevastopol (90 km.)
Amazing and inimitable Cape Aya is a 500-meter high steep wall jutting out into the sea. It is one of those places, which you visit once and then strive to rediscover them once again. It's Crimean peninsula's unique protected corner, whose lovely seaside landscapes are not inferior to fabulous Mediterranean sceneries. Here you will find everything necessary for full-blown recreation: clean air sat
more Show on map
Gurzuf • Yalta (103 km.) 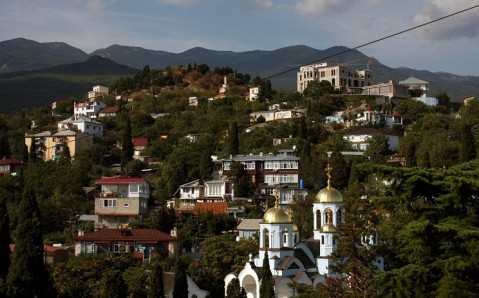 Gurzuf • Yalta (103 km.)
Gurzuf's size - it's a small resort settlement on the Southern Coast of Crimea - is incomparable to its popularity among vacationers and travelers. And it's no surprise: lying on the picturesque bay's beach caringly protected by the huge mountain amphitheatre, it attracts with its fabulous sceneries, curative climate, tender sea, and a bulk of natural, archeological and architectural monuments. P
more Show on map
← 12 3 4 →