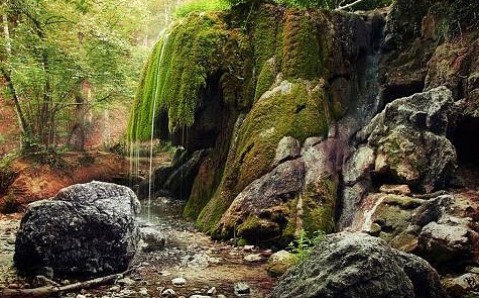 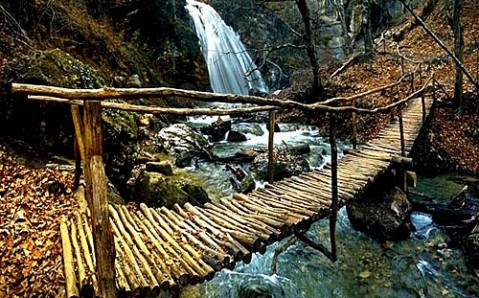 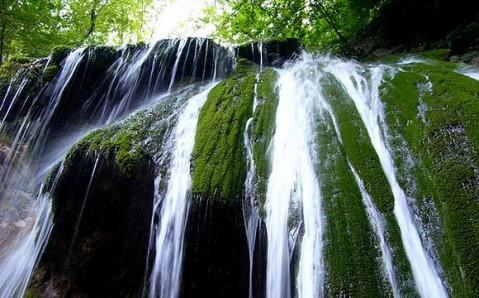 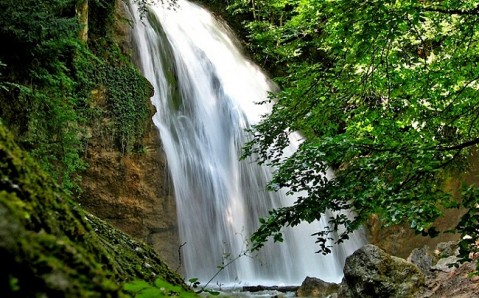 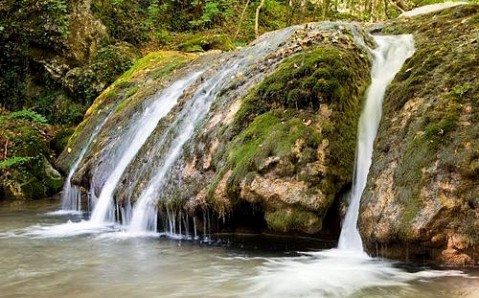 The full-flowing Jur-Jur Waterfall, situated in Alushta’s surroundings, in mysterious, densely overgrown with forest Khapkhal ravine, is rightly reckoned among the most beautiful Crimean waterfalls. In addition to being very picturesque, it is notable for being the most powerful waterfall on the peninsula: on the contrary to the majority of its Crimean ‘colleagues,’ Jur-Jur, whose water discharge is 270 liters pro second, doesn’t dry up even in drought season.

The Jur-Jur Waterfall is an amazing creation of the Ulu-Uzen River, which flows down from the mountains along the cascades, formed by three rapids of different size. The lowest and the largest one of them is an amazingly beautiful waterfall: a wide mountain stream falls from a 15-meter-high ledge into a deep ditch, breaking into icy dust at its foot.

One version says that Jur-Jur means ‘forever babbling,’ another one states that it is just an untranslatable imitation of the sound, made by water, gracefully falling down from the cliff. Anyway, the waterfall fully lives up to its name: it doesn’t make noise or rattle, but gently babbles, slowly sliding down the ravine.

If you proceed from the Jur-Jur Waterfall one kilometer up the river, you can see another natural wonder: a series of picturesque rapids and cascades with spectacular waterfalls, falling from them. In this place the river and local relief form peculiar baths, each having its own name and, according to popular beliefs, special ability. For example, ‘Bowl of Sins’ helps to wash away all sins, ‘Bowl of Love’ brings happiness in private life to those who bathe in it, and ‘Bowl of Health’ provides a long and healthy life. A 750-meter-long cave Jur-Jur is situated nearby.

A picturesque path leads to the waterfall from the neighboring village Generalskoye. It is framed with dozens of amazing wooden sculptures, made by locals; dark stones, covered with bright green moss, and multitude of peculiarly shaped trees stand next to them.

Getting here. Take a bus from Alushta to the village Generalskoye, cross the Ulu-Uzen River and walk up the road.