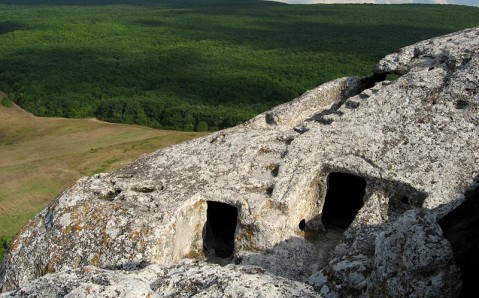 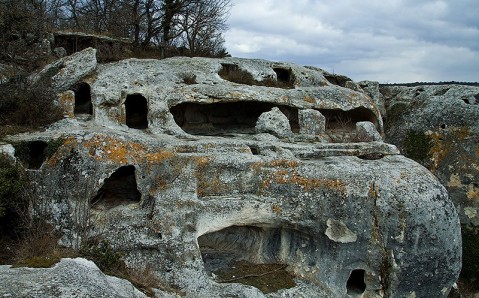 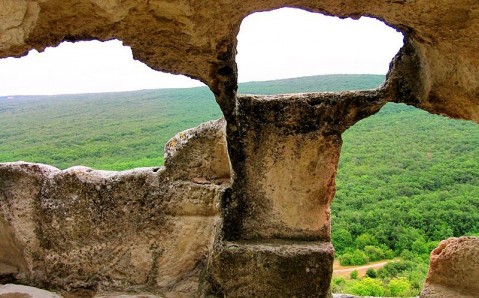 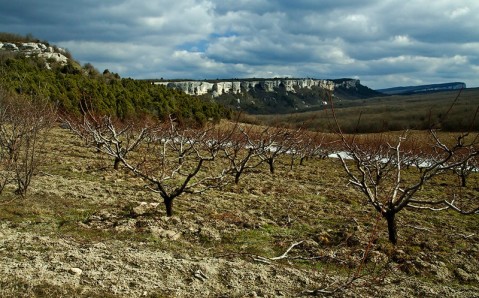 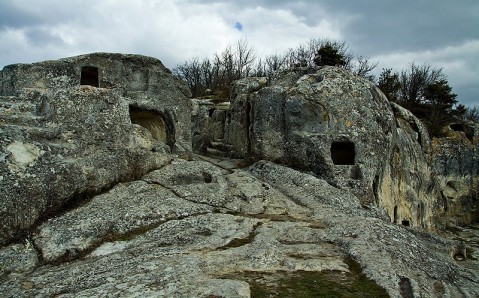 The ancient Eski Kermen is situated on the mountain tableland difficult of access. It is one of the oldest and the most picturesque cave towns in Bakhchysarai surroundings. Due to its imposing age and rare authenticity that allows feeling the atmosphere of antiquity in full, the medieval settlement, whose name means Old Fortress in Tatar, is reckoned among the most frequently visited archeological monuments of Crimea’s highlands..

The well fortified town-fortress was built by Byzantine residents in the late 6th century in order to protect approach to Chersonesus, which was Byzantine Empire’s main outpost on the Crimean Peninsula. Up to 30-meter-high forbidding sheer rocks surrounded Eski Kermen and served as its natural defense. In addition, massive stone walls towered in gorges’ upper reaches, which lead up to the city. Settlement’s fortification system consisted of the most fortified southern defensive center, situated at the main city gates, and of the northern patrol complex, which could be reached only by stairs through secret cave with hidden entrance. Casemates and rooms for guards who controlled approaches to Eski Kermen were situated right in front of the steeps.

Town’s prosperity period started in the 10th century and lasted for almost three centuries. At that time its territory widened to nine hectares, and its population rose to three thousand people who were mainly occupied in gardening and farming. Eski Kermen became a large trade and handicraft center and an important administrative and political center of the Southeastern Crimea. It was a full-blown medieval town, built-up with rectangular quarters that were divided by wide streets. In addition to dwelling buildings, several surface and underground temples were situated there.

In total, Eski Kermen numbered 350 caves, more than any other Crimean cave town. Most of them were used for household needs: as corrals and grocery stores. Separate network of caves served as a granary, whose reserves helped medieval town’s residents to withstand long sieges.

Eski Kermen ceased to exist in 1299, when it was almost completely destroyed by Mongol troops. The town tried to recover, but a century later, the Mongol army destroyed remaining fortifications and ravaged it. Since then, the Eski Kermen is abandoned, and numerous caves gape in it as wounds. Despite its tragic fate, the city managed to preserve the remnants of many fortifications, temples, and residential estates cut in the rocks. Now it offers an opportunity to visit amazing stone houses and to walk through medieval streets.

The Temple of Three Riders, carved into gigantic stone mass, is Eski Kermen’s structure of great interest and value. Fragments of fresco painting, dated to the 12th-13th centuries, survived on its walls. Ruins of another ancient temple – the Basilica, built fifteen hundred years ago – stand on the former central square of the cave town. One of Eski Kermen’s most interesting sights is a deep siege well, cut through the entire thickness of the rock. Stairs with 89 steps descended into its depth and lead to the cave, in which water arrived from sources at the foot of the plateau and accumulated.

Getting here. Take a bus from Bakhchysarai to one of the villages neighboring Eski Kermen: Holmovka, Zalesnoye or Krasny Mak. Then, walk to the mountain plateau. 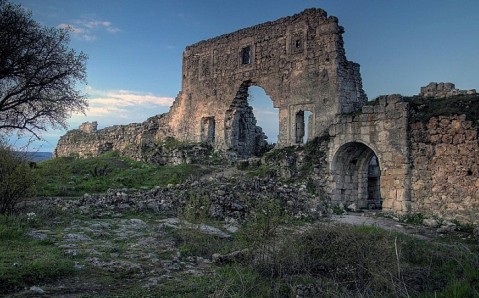