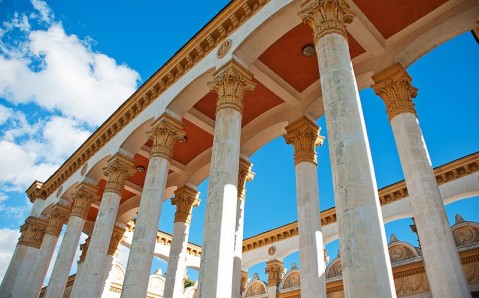 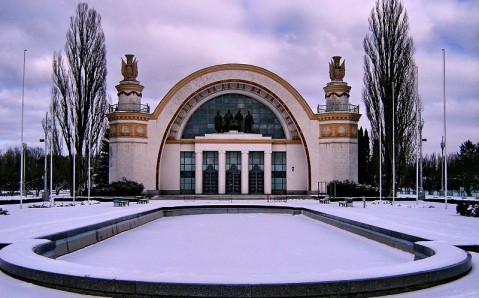 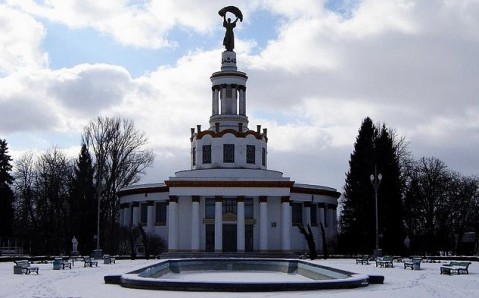 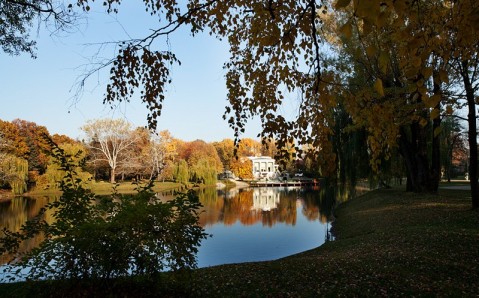 The national complex Expocenter of Ukraine, or called by the locals as of old the Exhibition of National Economy Achievements (ENEA) is the truly unique place in the South-Western outskirts of Ukraine's capital. It is simultaneously one of the largest exhibition centers in the country, wonderful recreation zone, and amazingly important architectural complex, a vivid embodiment of the Soviet gala architecture.

The Exhibition of National Economy Achievements of Ukrainian SSR was built in the post-war years and was supposed to become the permanently functioning center demonstrating republic's achievements in industry, agriculture, construction, transportation field, science and culture. The official opening of the exhibition center, situated on the territory of the protected Holosiivsky Forest, took place in 1958.

It was built in a big way inherent in the Soviet times, and therefore, complex's size is truly impressive. It spreads over the area of almost 300 hectares and includes 180 different buildings, 20 of which have the status of historical and cultural monuments of Ukraine. Besides exhibition halls, outdoor exhibition grounds were equipped in the center, gardens and alleys were laid out, fountains were built, artificial ponds were created, and cafes and restaurants were opened. All this made the ENEA not only a great place for various exhibitions, but also an excellent recreation center for Kyiv's locals and guests.

The main treasure of the Exhibition of National Economy Achievements is perhaps its monumental architecture reflecting the whole epoch. Complex's exhibition halls designed by the best painters and sculptors, are probably the country's most vivid samples of the Soviet architecture with its distinctive grandeur and pathos. The hall №1 - crowned with golden spire, laced rotunda with pillars and emblems of Ukraine's regions above them - is ENEA's compositional center.

Rows of other exhibition halls and buildings, richly decorated with bas-reliefs depicting the Soviet age symbols and with sculptures on the agro-industrial theme, stretch astride it. Thus, the elements of the large fountain, located in front of the central exhibition hall, are shaped as sunflowers and corn. And kolkhoz member's statue proudly holding a sheaf of wheat above her head stands on the 10th exhibition hall's building. It is the reminder that Ukraine used to be the breadbasket of the Soviet Union.

Walking paths leading to the linden and spruce alleys are laid out on the exhibition complex's territory. Local shady gardens, ponds and lakes have become the favourite strolling place for Ukrainian capital's residents long ago. People come here - the same as to any other Kyiv park - in order to rest from the city fuss and to enjoy the beauty of the nature.

3 km. More info
The Museum of Folk Architecture and Life in Pirogovo