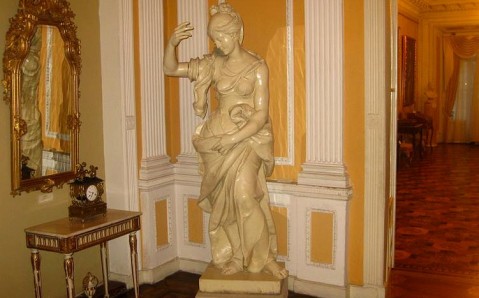 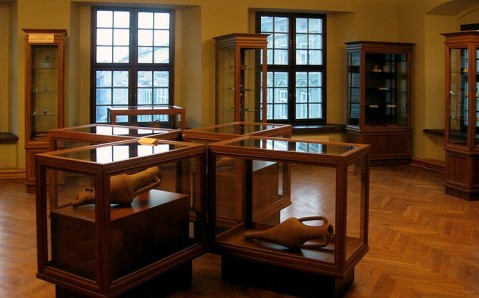 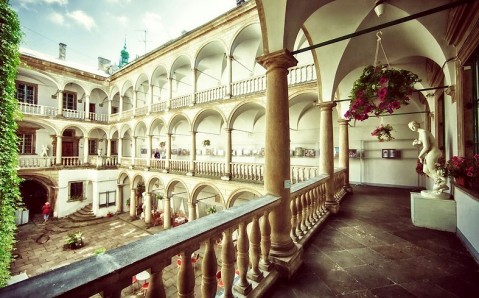 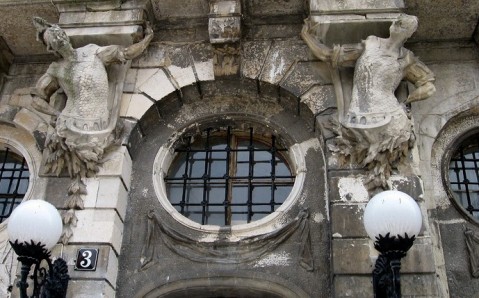 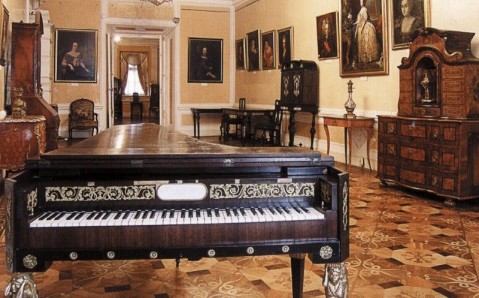 The Kornyakt’s House is rightly considered to be one of the biggest, most eminent and beautiful dwelling houses, surrounding the central city square Rynok. Its richly decorated stone building is a true gem of Renaissance housing architecture. It used to house rich merchants, Polish kings and monks in different times, and now the very interesting exposition of the Lviv History Museum is situated here. It tells the vivid and eventful history of the West Ukrainian lands form ancient times to the present.

The building was raised by the prosperous merchant and prominent public and political figure, Greek Constantine Kornyakt, in the middle of the 16th century. He bought two small dwelling kamenitsas on the main city square and, in 1580, Italian architects built a three-storied house on their place, which became the most majestic and beautiful one on the square and in the whole Lviv.

The Kornyakt’s Palace’s distinctive feature that captured attention in the first place was the fact that it was six-windows wide. In medieval Lviv, houses, standing on the Rynok Square, were allowed to have no more than three windows; one could add one more window, having paid extra fee to the city treasury. The privilege to build six-windows wide houses was granted only to citizens with outstanding service to the city and the state. Constantine Kornyakt, who used to be King Sigismund II Augustus’ private secretary, took advantage of such privilege, given to him by the King of Poland.

After his death, the house repeatedly changed owners. Kornyakt’s Palace shortly hosted Carmelite monks, and then in the middle of the 17th century, passed to the family of the Polish King John III Sobieski and was renamed as the Royal Kamenitsa. At the same time, the building underwent the first substantial reconstruction: new owners merged it with neighboring house and turned it into their palatial residence with numerous rooms and a hall for high-rank meetings. It was there that the so-called Eternal Peace Treaty of 1686 was signed between Russia and the Polish-Lithuanian Commonwealth.

Afterwards, palace’s numerous owners tried to rebuild it in accordance with their tastes. Now it is an elegant mélange of styles and epochs. Building’s true adornment is the so called ‘Italian’ yard with light open-worked loggias, typical for Roman and Florentine patios. Hidden inside the house, it is an oasis of silence, peace and comfort near the loud and fussy city square. In the 18th century, Shakespeare’s plays were staged, and now art festivals and jazz concerts are held here. The ‘Italian’ yard hosts the namesake café, where one can taste an excellent coffee, and the exhibition of sculptures, including the pillory that stood in front of the town hall in the Middle Ages.

Valuable expositions of the Lviv History Museum occupy the Kornyakt’s House for over fifty years already. There are unique collections of antique furniture, paintings and jewelry, musical instruments, works of art from glass and porcelain, ancient coins, rare medals and samples of weapons. However, museum’s main treasure is its luxurious ‘Royal Halls,’ furnished in the Lviv Palaces’ style of the 18th – 19th centuries.