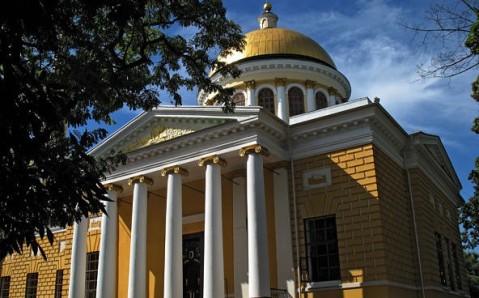 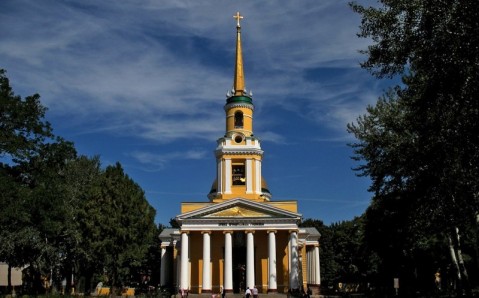 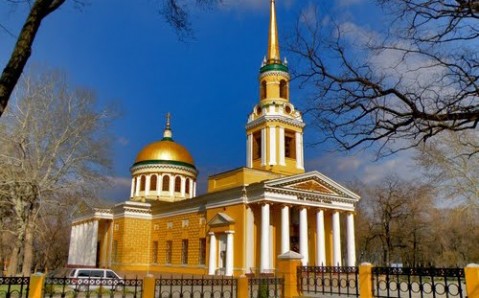 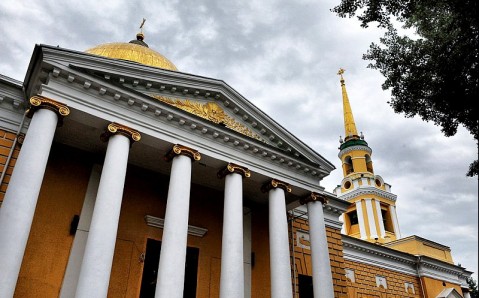 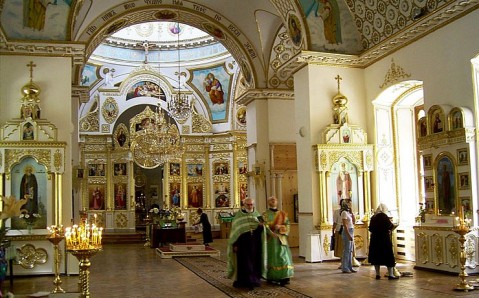 Situated at the town's historical center, the majestic, striking with its strict beauty Transfiguration Cathedral is Dnipropetrovsk's symbol and belongs to Ukraine's prominent cultic buildings. This magnificent temple is the brightest architectural monument in classicism style and remains Dnipropetrovsk's true adornment for almost two centuries already.

The first stone in the Cathedral's foundation was laid by Empress Catherine the Great in 1786 - simultaneously with city's foundation. The prominent architect Claude Gerua wanted for Dnipropetrovsk’s church to exceed famous Rome’s St. Peter's Cathedral in size. However, another Russian and Turkish War broke out and the temple's construction was postponed for an indefinite term.

In 1835, almost half a century later, the Transfiguration Cathedral was finally built at the town's center, but upon totally different design. Although new church was in several times smaller than initially planned, it remained the biggest one in Dnipropetrovsk until the early 20th century and had amazing classical architectural forms.

The Transfiguration Cathedral's interior was created with an eye to the Trinity Church of the Alexander Nevsky Lavra in St. Petersburg and borrowed some elements from other Cathedrals of Russian Empire's capital. It is probably due to the fact that the architect was St. Petersburg's resident and designer of the magnificent Admiralty building there.

When looking at the Transfiguration Cathedral, the graceful bell tower's spire, rising over its main entrance, rivets special attention. The belfry is notable not only for its ornate style and beauty, but for having one of the biggest bells (6-ton) in Ukraine. Locals ascribe wonder-making qualities to the bell and try to sound it at every opportunity.

With collapse of the Russian Empire, the temple suffered tough times. New authorities planned to blow up the Transfiguration Cathedral. Dnipropetrovsk's prominent historian, however, thought out a tricky way to save the temple: the Museum of Atheism was opened in it. Thanks to this idea the Transfiguration Cathedral's original icons and unique iconostasis were preserved under the veil of museum's exhibits of historical value.

In this status the temple survived the Second World War, however, it lost almost all its valuables right after the War's end. The Soviet fighters against religion burned out its iconostasis, icons and other church utensils, and the Cathedral was turned into storehouse for paper.

Only in the late 20th century - when Ukraine became independent - the Transfiguration Cathedral started functioning again. The building was restored and brought back to its historical look. Therefore, despite all the twists and turns in its tough history, the Cathedral continues to please believers and numerous tourists even today.