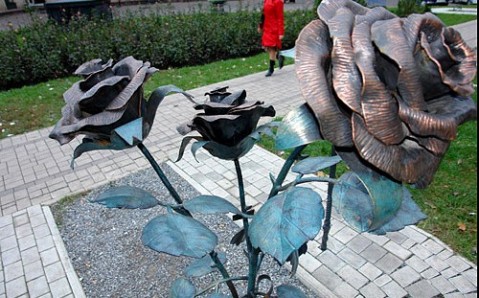 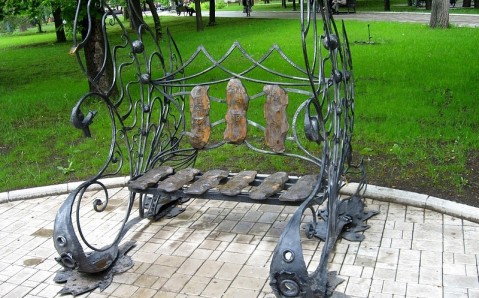 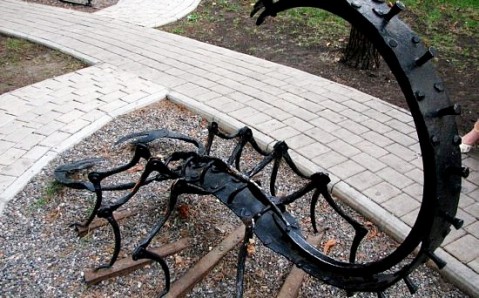 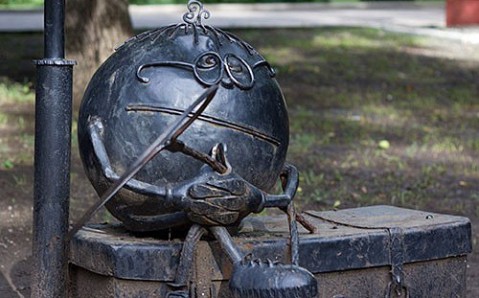 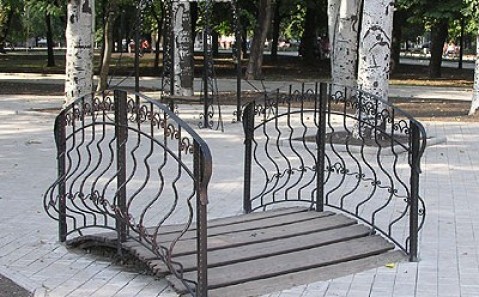 Artema St. 102-a, park behind the building of city executive

Donetsk is officially recognized as one of the best blacksmith cities in Europe and is the only post-Soviet city that is full-fledged member of the Ring of European Cities with Iron Works. Therefore, it's no wonder that the unique Forged Figures Park - the only one in the Old World - is located here. It's a true outdoor museum of blacksmith art and one of the most interesting Donetsk's sights.

The park with forged sculptural compositions appeared in Donbas's capital over ten years ago. At first it consisted of just ten sculptures with bunch of forged roses - the Donetsk's symbol - in the first place. However, thanks to the annual International Festivals of Smithcraft in Donetsk, the collection of sculptures grew headlong and now it numbers over 150 exhibits.

During the first year after its creation, the Park added twenty new sculptures and two elegant forged arbors - 'Four Dragons' and 'Ukrainian', which was singled out at the World Fair in Hannover - to its collection. One year later joint efforts of many Donetsk's blacksmith workshops developed into 'Arbor of Sweethearts' decorated with plenty of bunches of forged flowers. Today it is the favorite place for Donetsk's newlyweds.

Another Festivals of Smithcraft presented the Signs of the Zodiac Alley that consists of twelve marvelous zodiac figures to the Park. Its appearance laid a foundation for creation of theme lanes and whole quarters on the park's territory. Carrying on this tradition, blacksmiths from different countries forged a series of sculptures that made up the Fairy Tales Alley. It is the result of blacksmiths' artistic comprehension of world folk fairy tales.

The Arch Alley - ten author's forged arches with 16 original benches between them - adds a special color to the Park. The Master Alley's sculptures that appeared here a year later are devoted to the token for Ukraine event - Euro-2012. The same year a forged copy of the Eifel Tower was added to the Park's collection. It became foundation for creating the Architectural Copies Alley devoted to the world architectural sights. Soon it was decorated with copies of London's Big Ben and Moscow's Saint Basil's Cathedral.

And very recently the unusual Superstitions Alley, consisting of thirteen fairytale representatives of the evil spirit and mystical symbols, appeared in the Park. Forged Figures Park's most recent acquisition is the Christmas tree, made by blacksmith craftsmen from different Donetsk region's towns.

As far as the Festival of Smithcraft in Donetsk acquired an international status long ago and from year to year gathers more and more talented craftsmen from all over the world, there is no doubt that the Forged Figures Park's unique collection will grow and be replenished with interesting exhibits.

Tsar Cannon and the Bell