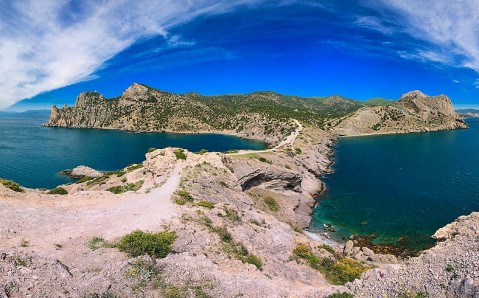 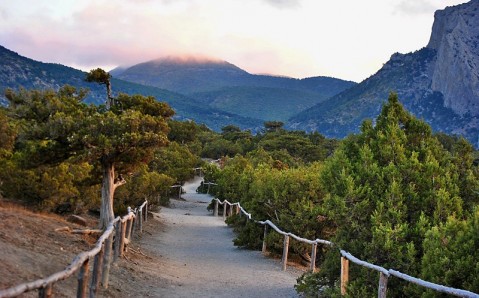 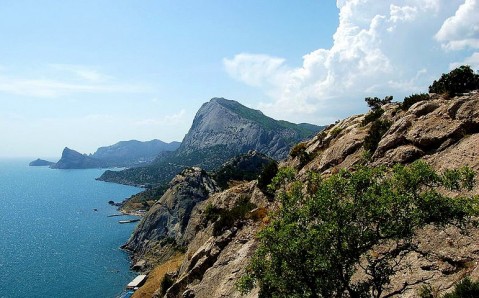 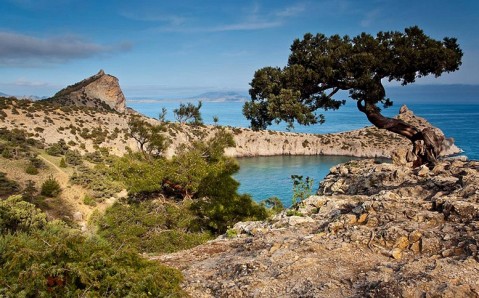 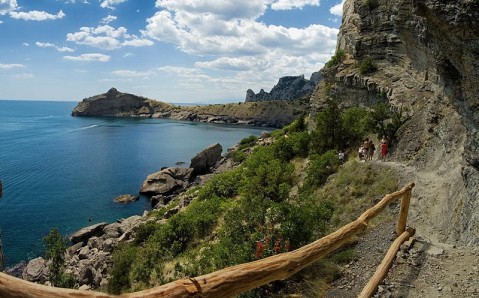 Kapchik is a long cape with narrow isthmus that juts out into the Black Sea for almost three hundred meters. It is reckoned among the most interesting natural objects of the Novyi Svit and tops the list of its most magnetic attractions. The unusual stony cape has peculiarly twisted form and separates picturesque Sinyaya Bay from Golubaya Bay. It is considered to be one of the most mysterious capes on the Crimean peninsula. Its subsoil hides the whole world, and every visitor of the Novyi Svit’s seashore dreams of sneaking a look at it.

‘Kapchik’ is Turkic word for a long narrow bag, which was worn on the belt by dervishes. People often refer to the cape as to Lizard: its arched shape and unusual outline are really reminiscent of a giant prehistoric lizard that bows its head to the water.

However, being an age-old coral reef, Kapchik is interesting not only for its peculiar form. The huge rocky mass is transpierced by a natural 77-meter-long and 17-meter-high cave, which is nicknamed as Through Grotto (Skvoznoy Grot). It is unique because unlike other Crimean caves, formed mostly by ground waters, it was born as a result of tectonic fault and movement of limestone, from which the cape is composed.

On par with many other Novyi Svit’s notable sights, the Through Grotto was discovered and popularized by the former local landowner, Russian Prince Lev Golitsyn. Making a sea trip near the Cape Kapchik, he noticed caverns in the stony mass, opened them and discovered an amazing cave. Soon, the prince ordered to cut stairs to the grotto from Golubaya Bay’s side. Its entrance was shaped as an arch and an elegant antique door was hung there. Grotto’s opposite side faced the Sinyaya Bay. Its stone galleries were deepened, decorated with colorful stained glass windows and equipped with stairs for easier descent to the sea.

In the year 1903, the Prince Golitsyn turned the Through Grotto into impromptu banquet hall and celebrated his anniversary there. And long before that, in the Middle Ages, sea pirates used to hide stolen riches in the cave. It was also used by smugglers, who hid their goods and organized meetings with accessories there. Today, the Through Grotto is closed for visiting due to high risk of rockfall. Nevertheless, you can admire the fabulous cave through the latticed door, mounted at its entrance.

Recently, seven additional underwater galleries that smoothly pass into dry caves in the rock mass were found next to the Cape Kapchik. These include the 70-meter-long Lake (Ozernaya) Cave with a salt lake inside.

The Cape Kapchik features breathtaking views of Sudak and Novyi Svit’s seashore. And in the clear weather, one can see almost entire Southern Coast of Crimea.

Getting here. You can reach the cape, and in particular the Through Grotto, along the well-known Golitsyn’s Path.