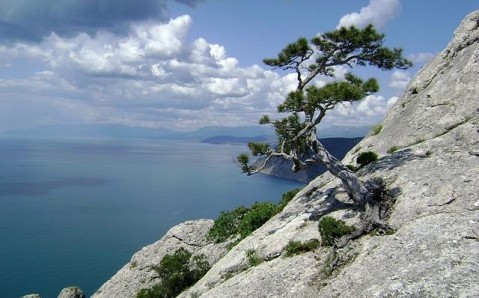 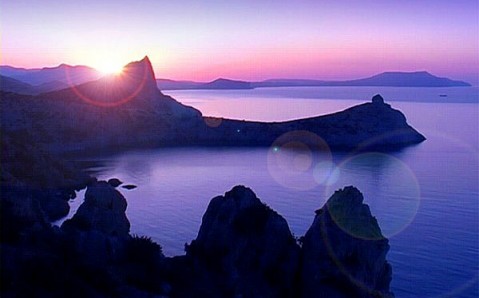 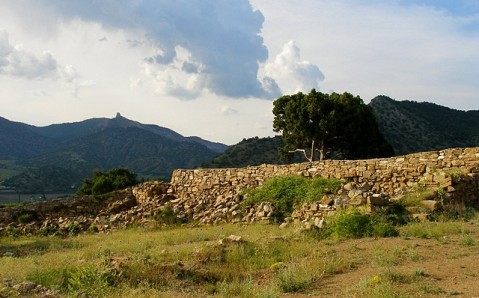 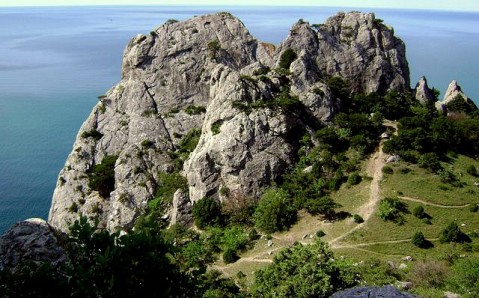 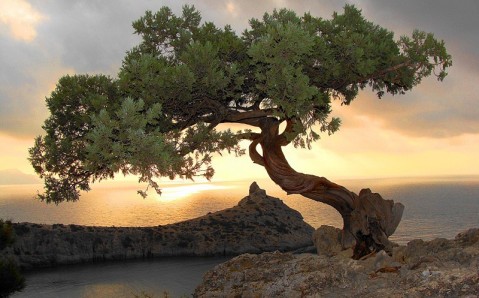 The mount Karaul-Oba is a part of the nature reserve Novyi Svit and is reckoned among many unique natural wonders of Sudak’s surroundings. This antique 341-meter-high coral reef with picturesque slopes, covered with juniper and relict pines, towers over resort settlements Vesyoloye and Novyi Svit as a protective shield. Karaul-Oba is interesting for original natural and archeological attractions, as well as for splendid panoramic views: in clear weather, one can see the whole Southern Coast of Crimea from its top. It is this feature that gave the name to the mountain. ‘Karaul-Oba’ means ‘Watch Mountain’ or ‘Guard Peak’ in Crimean Tatar.

In spite of its forbidding appearance, it is not hard to ascend Karaul-Oba. An equipped green path leads to mountain’s top and welcomes everyone to surmount it. If you start the ascent from the side of the settlement Vesyoloye, the tourist path that meanders along the Kutlak Bay will first bring you to the Valley of Hell: the picturesque gorge with sheer rocks that seem to close up over your head. There you can see spectacular mountain cliffs with mysterious cracks and rock mess. In addition, the Valley of Hell shelters several caves. The most interesting one is the so-called Cold Cave, which resembles a deep cleft. Noteworthy is the fact that the temperature inside it remains the same – plus 10 degrees – at any season. Therefore, you can escape from the heat of a hot summer day there.

The path leaves the Valley of Hell and leads to a small steep, where the nature has created a tiny observation area, shaped as an amphitheater. It features breathtaking views of the Kapchik Cape, Novyi Svit’s picturesque surroundings and three amazing bays: Azure, Blue and Green. The founder of Russian winemaking, Prince Lev Golitsyn liked to admire mind-boggling landscapes from this spot. He built a sparkling wine factory in Novyi Svit, which made him famous far beyond the Russian Empire. On prince’s order, the well-known ‘Golitsyn’s Chair’ was cut out of stone on the Karaul-Oba observation area. Sitting in this chair and watching Crimea’s fantastic panoramas, one feels himself as a viewer of extraordinary natural performance.

The next stop is the Valley of Paradise. It is light, spacious and alluringly charming. Then, the path leads to the stone spiral staircase, cut in the rock. Historians believe that it was made by ancient Tauri (the people that lived in Crimean highlands more than two thousand years ago), and the Prince Golitsyn just slightly renewed it in the late 19th century. The staircase clambers to the deep narrow gorge, covered with a green ivy carpet. It is called Adam’s Bed. Having passed through it, you can get to the place where Tauri camp and shelter used to be located. Ancient household items, in particular fragments of crude Tauri earthenware, are still found there.

Karaul-Oba’s another interesting archeological monument is situated on its western spur. It is the ruins of the Bosporan Fortress, built in the first century B.C. in order to fight against sea piracy. Archeologists suppose that a watch tower stood on mountain’s top at that time. It was a part of the ancient fort. Round stone shots for slinging and flint tools were found there.

Having explored the attractions of Karaul-Oba, you can relax at its foot, on the famous Tsar's Beach with crystal pure azure water.