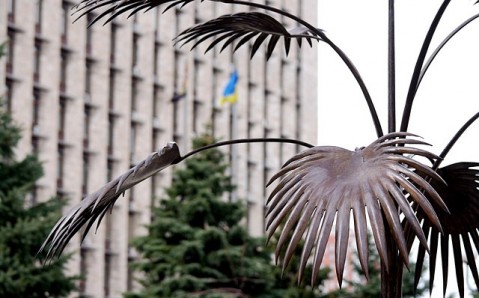 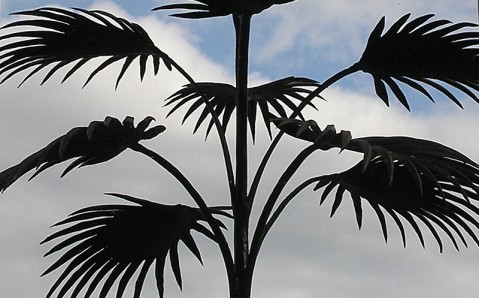 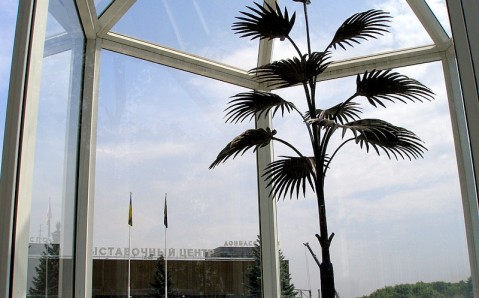 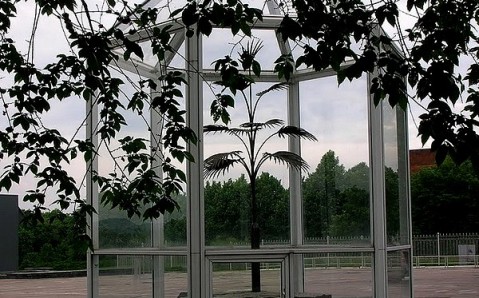 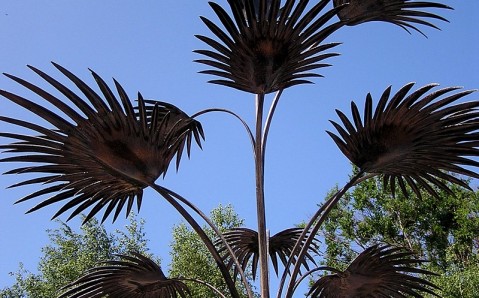 Donetsk has long been famous as a home of skillful blacksmiths who created genuine masterpieces. One of these amazing creations is the Mertsalov’s Palm. It is not only city’s significant landmark, but also a symbol of the entire region.

The steel palm was forged by the local craftsman, a worker of the Donetsk metallurgical works, Alexey Mertsalov, in the end of 1895. The sculpture was intended for the coming All-Russian Industrial and Art Exhibition, which was held in Nizhniy Novgorod. There are several versions as to why it was decided to immortalize a palm tree in steel. The most plausible one is that Alexey Mertsalov visited a bar of a hotel and saw a real palm in a tub near his table. The peculiar plant amazed and interested the blacksmith and he came up with an idea for the future masterpiece. The next day, the director of the metallurgical works approved Mertsalov’s idea and entered the steel palm in the list of exhibition items.

Mertsalov and his assistant worked on their masterpiece for three weeks and created a 3,5-meter-high sculpture of palm tree, made out of a rail. The uniqueness of the forged figure is that it was produced without welding or joints: the blacksmiths used only hammer and chisel. The palm was placed in the forged tub, consisting of four fortified rail poles, around which twenty-three metal rings with different cross-sections were laid.

The Mertsalov’s Palm caused a commotion at the industrial exhibition in Nizhniy Novgorod; it was highly appreciated by both specialists and mere visitors. The later ones were delighted by the elegant sculpture: despite being made of harsh material, the palm tree seemed to be surprisingly light and looked like a live plant. Four years later, the Donetsk masterpiece was appraised in Paris: the Mertsalov’s Palm took the grand prix at the International Industrial Exhibition. Then, it was given to the Saint-Petersburg Mining Institute, where it is kept until now.

After a while, Donetsk authorities realized sculpture’s high artistic and historical value and repeatedly tried to return the rarity back. Unfortunately their attempts were in vain. Then, local blacksmiths decided to make copies of the famous Mertsalov’s Palm. The first four-meter-high replica appeared on the square in front of the exhibition center Expo-Donbas, in 1999. Just like the original sculpture, it was made out of rail. The second copy was installed on the Pushkina Boulevard near Donetsk Regional State Administration, eight years later. This palm tree, weighing 500 kilograms, is made out of Damask steel; each of its ten leaves consists of 120 layers of metal in six different colors.

An image of the Mertsalov’s Palm is depicted on the Donetsk oblast coat of arms, symbolizing ferrous metallurgy and coal industry. According to another interpretation, palm’s sturdy trunk symbolizes unity and commitment, its roots, stretching into the ground, are the source of power and wealth, and the broad leaves symbolize a range of different spheres of activity.

Mertsalov’s Palm’s copies can be seen in many cities of the world: Kyiv, Lviv, Kharkiv, Moscow, Hanover, Ottawa.