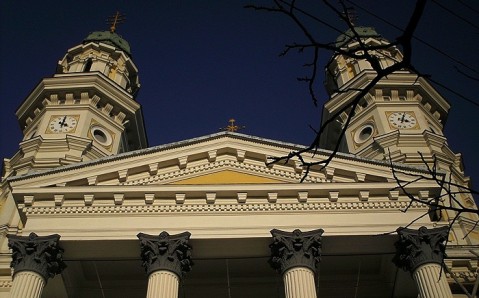 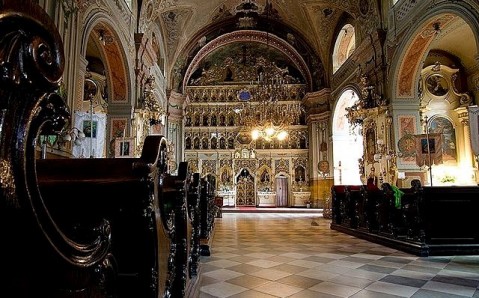 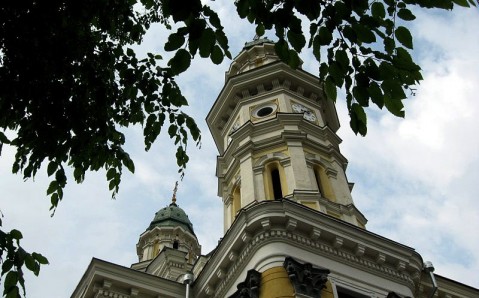 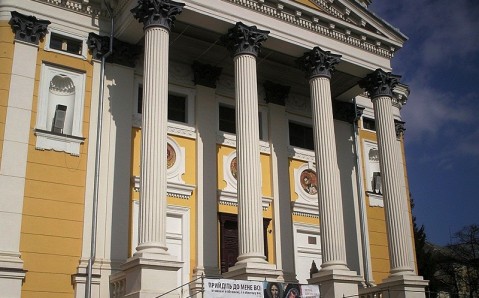 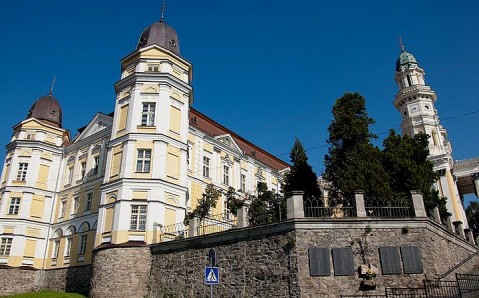 The majestic Holy Cross Cathedral, proudly standing in the historical city center near the ancient castle, is one of the most beautiful buildings in Uzhgorod that invariably draws attention with its luxurious shapes. This original temple, frequently called city’s architectural treasure, is reckoned among its most interesting sights.

Cathedral’s history started in the 17th century, when the Hungarian Count Jan Druget, who ruled in Uzhgorod back then, invited Jesuits to the city and allocated land on the Castle Hill to them. Soon, the monks built a monastic complex here, with a small Roman Catholic Church being its central building.

However, after the abolition of the Jesuit monastic order in 1773, the temple passed to the Greek Catholic diocese. As a result, it was turned into cathedral and rebuilt in baroque style; at the same time a bell tower was raised near it. The temple has preserved this look until now.

Even today the Holy Cross Cathedral strikes with originality of its architecture and luxury of its interior decoration. Despite its impressive size and monumentality, cathedral’s unusual planning makes it seem light and elegant. The red marble stairs lead to the portico with four pillars, which adorns temple’s facade. The building itself is topped with two jutting into the sky three-tier cupolas that act as belfries. Two huge bells, weighing one and three tons, are installed inside. Both belfries are decorated with unusual chiming clocks that were specially brought for the temple from Vienna.

The Holy Cross Cathedral’s interior amazes with its intricate baroque décor. Strikingly beautiful wall painting, made by the best Zakarpattia artists in the early last century, adds special charm to the temple. Some fragments of the 18th century’s frescos have also survived in the cathedral.

After the World War II, the Holy Cross Cathedral was given to the city’s Orthodox community, and wasn’t returned to the Greek Catholics until 1991. Now, the temple is not only the unique architectural monument, but also Uzhgorod’s main spiritual center.