Zakarpattia Museum of Folk Architecture and Heritage • Uzhgorod
Zakarpattia Museum of Folk Architecture and Heritage, located at Castle Hill’s foot, is one of the most original and interesting museums not only in Uzhgorod, but also in the whole region. This skansen is the oldest museum of such kind in the country and is rightly considered to be the true treasury that keeps unique monuments of Zakarpattia material and spiritual culture. Authentic wooden archite
more Show on map
Nevitsky Castle • Uzhgorod 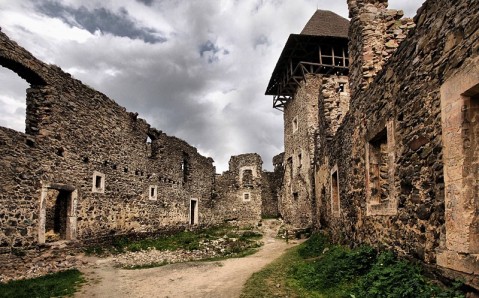 Nevitsky Castle • Uzhgorod
The Nevitsky Castle, whose ruins lie on the top of the high mountain in the picturesque Uzh River’s valley, is called one of Zakarpattia many architectural wonders for a reason. Despite the fact that only walls and several towers remained from the medieval castle, it still makes a strong impression on history buffs and romantics who come up here in order to admire charming Carpathian panoramas. Th
more Show on map
Catholic Church of St. George • Uzhgorod

Catholic Church of St. George • Uzhgorod
The elegant Catholic Church of St. George decorates Uzhgorod’s historical center for several centuries already and is one of the most ancient catholic temples in the city. Its high, topped with three domelike turrets building is officially reckoned among the most beautiful and remarkable cultic constructions of the ancient city. Uzhgorod residents owe the appearance of this architectural gem to t
more Show on map
Uzhgorod Castle (Zakarpattia Local History Museum) • Uzhgorod

Uzhgorod Castle (Zakarpattia Local History Museum) • Uzhgorod
The medieval castle standing on the hill in the Uzh River valley is ancient Uzhgorod’s historical heart and its major sight. Despite its venerable age, it is perfectly preserved and is reckoned among the most famous and frequently visited castles in Ukraine. Visiting it allows not only to see the priceless historical and architectural monument, but also to feel the true medieval spirit that soars
more Show on map
The Holy Cross Cathedral • Uzhgorod

The Holy Cross Cathedral • Uzhgorod
The majestic Holy Cross Cathedral, proudly standing in the historical city center near the ancient castle, is one of the most beautiful buildings in Uzhgorod that invariably draws attention with its luxurious shapes. This original temple, frequently called city’s architectural treasure, is reckoned among its most interesting sights. Cathedral’s history started in the 17th century, when the Hungari
more Show on map
House Museum of Lesya Ukrainka • Lutsk (336 km.)

Zymne Monastery • Lutsk (283 km.)
Standing on a small mountain in Zymne village, not far from Lutsk, the Zymne Svyatogorsk Monastery is one of the Ukraine’s oldest monasteries. According to legend, it was founded by the Prince Vladimir the Great, under whose reign the Rus was baptized. It was on the Svyata Hora (Holly Mountain) that he founded his winter residence, in 1001. He ordered to build two wooden churches and a tower palac
more Show on map
Dubno Castle • Rivne (320 km.)

Dubno Castle • Rivne (320 km.)
The Dubno Caste stands on the steep cape near the Ikva River, in the city very center. It is one of the Ukraine’s oldest fortification complexes. Impressing with its majestic beauty and huge historical value, it is a part of the Dubno historical and cultural reserve and is recognized as a true gem of Ukraine’s castle architecture. The Prince Konstantin of Ostroh built the castle on the place of th
more Show on map
St. Nicholas Cathedral • Kremenets (298 km.)

St. Nicholas Cathedral • Kremenets (298 km.)
The light and elegant baroque building of the St. Nicholas Cathedral is one of the Kremenets’s architectural trademarks. This amazing temple attracts not only with its charming forms, but also with its tough history. It started in the middle of the 16th century. The Polish King Sigismund I Bon’s wife, who owned Kremenets castle, ordered to erect a wooden parish church, which then became the first
more Show on map
←1 2 3 4 5 6 →  End