Theater Square • Chernivtsi
The Theater Square with its charming architectural ensemble is one of the most beautiful in Chernivtsi, and earlier it was reckoned among the best small squares in Europe. Today, looking at this elegant and graceful square, it is hard to believe that, in the late 18th century, it was unremarkable city outskirts merging with the dense forest. Half a century later, small market square was formed. Fi
more Show on map
St. Nicholas Cathedral • Chernivtsi 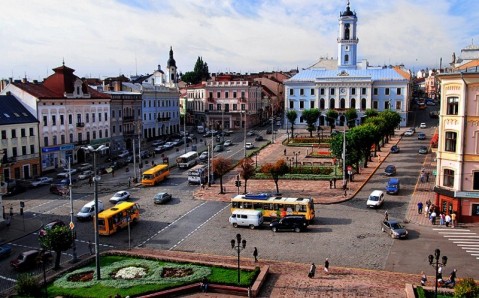 Central Square and the Town Hall • Chernivtsi
The Central Square from where Chernivtsi main streets radiate is old town's heart and one of its most recognizable symbols. Square's architectural ensemble consists of elegant, as if emerged from a fairy-tale, buildings, is recognized as one of the most beautiful in Chernivtsi and embodies the unique look of Bukovina capital. The Central Square appeared thanks to the Austrian Imperator Joseph II w
more Show on map
Zymne Monastery • Lutsk (301 km.)

Zymne Monastery • Lutsk (301 km.)
Standing on a small mountain in Zymne village, not far from Lutsk, the Zymne Svyatogorsk Monastery is one of the Ukraine’s oldest monasteries. According to legend, it was founded by the Prince Vladimir the Great, under whose reign the Rus was baptized. It was on the Svyata Hora (Holly Mountain) that he founded his winter residence, in 1001. He ordered to build two wooden churches and a tower palac
more Show on map
Dubno Castle • Rivne (237 km.)

Dubno Castle • Rivne (237 km.)
The Dubno Caste stands on the steep cape near the Ikva River, in the city very center. It is one of the Ukraine’s oldest fortification complexes. Impressing with its majestic beauty and huge historical value, it is a part of the Dubno historical and cultural reserve and is recognized as a true gem of Ukraine’s castle architecture. The Prince Konstantin of Ostroh built the castle on the place of th
more Show on map
St. Nicholas Cathedral • Kremenets (201 km.)

St. Nicholas Cathedral • Kremenets (201 km.)
The light and elegant baroque building of the St. Nicholas Cathedral is one of the Kremenets’s architectural trademarks. This amazing temple attracts not only with its charming forms, but also with its tough history. It started in the middle of the 16th century. The Polish King Sigismund I Bon’s wife, who owned Kremenets castle, ordered to erect a wooden parish church, which then became the first
more Show on map
Johann Georg Pinsel Museum of Sculpture • Lviv (221 km.)

Johann Georg Pinsel Museum of Sculpture • Lviv (221 km.)
The museum of sacral baroque sculpture is reckoned among the Lviv’s most interesting and impressive museums. It keeps the unique heritage of Johann Georg Pinsel – one of the most talented and mysterious sculptors of the 18th century. He is nicknamed Ukrainian Michelangelo for extraordinary mastery. The museum is situated in the building of the age-old Catholic church, which formerly belonged to t
more Show on map
Jesuit Monastery and Collegium • Kremenets (201 km.)

Jesuit Monastery and Collegium • Kremenets (201 km.)
Consisting of a two-tower Catholic church and adjoined study buildings in the late baroque style, the ensemble of the Jesuit Monastery and Collegium strikes with its beauty and grandeur. Situated in Kremenets’s very center, it is city’s main architectural symbol and one of its most attractive sights. Being famous for their educational activity, the Jesuit monks were invited to Kremenets by the Lit
more Show on map
Ostroh Castle • Rivne (230 km.)

Ostroh Castle • Rivne (230 km.)
Menacingly towering over the twenty-meter-high hill in the age-old town of Ostroh not far from Rivne, the Ostroh Castle is seen as a token sample of the Ukrainian fortification architecture and is recognized as one of the Volyn’s most interesting historical and architectural monuments. In the 14th century, the castle complex was raised on the place of the Old Russian town, which was destroyed by M
more Show on map
←1 2 3 4 5 6 →  End