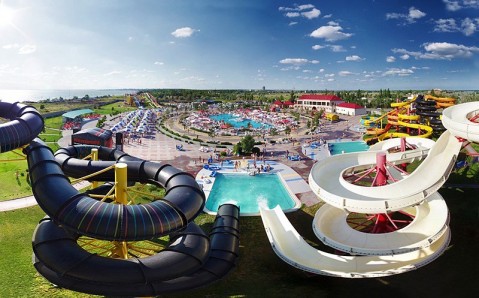 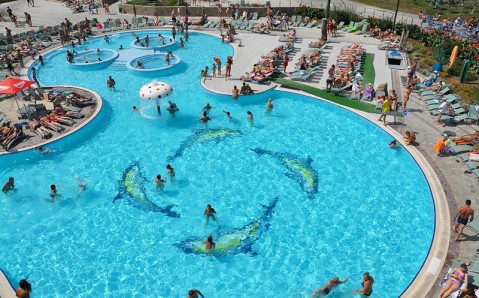 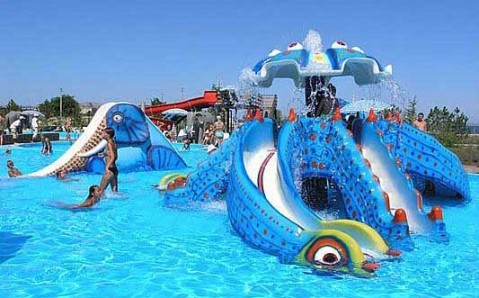 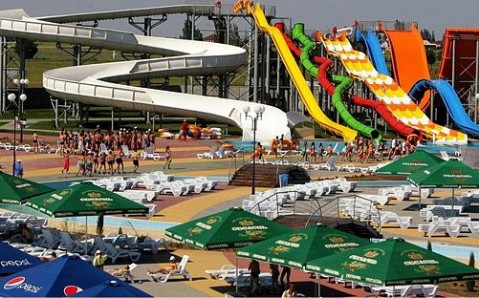 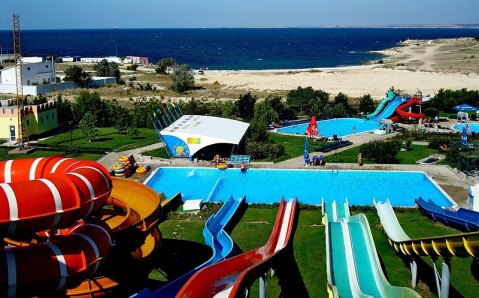 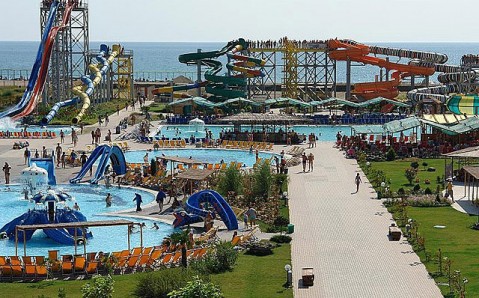 During hot summer days, you can hardly find better recreation place than a water amusement park. They are very popular among calm family recreation lovers and among fans of active pastime alike. This article offers a selection of Ukraine’s top five water amusement parks, where one can have a great time, get a charge of adrenaline and a lot of positive emotions.

It is located in the center of resort town Kirillovka, on the Azov Sea shore. Today, it is the Ukraine’s largest water park, which is reckoned among the ten largest water complexes in Eastern Europe. It has a territory of around 60 thousand square meters and can simultaneously accommodate up to 3 000 visitors.

34 park amusements function at its large territory: 16 for adults and 18 for children. The most captivating slides are “Black Hole,” “Multislide,” Tsunami” and the Ukraine’s longest basin-amusement with ground geysers – the “Lazy River.” The most popular amusement in “Ostrov Sokrovish’s” children’s zone is the six-meter-long pirate ship with 16-meter-high masts.

Aquabar, where you may enjoy refreshing cocktails, not leaving the water, is situated by the central pool. In addition, the complex features seven cafes, which offer to slake thirst and refresh yourself. Stylish club parties take place on the park’s premises in the evening.

The water park is situated on the Black Sea shore, in the resort settlement not far from Yevpatoria. It is reckoned among the top three largest water amusement complexes in the Crimea. Up to 2 500 people can simultaneously rest on the “Banana Republic’s” territory, which is more than 40 thousand square meters large.

The water park is divided in adult and children’s areas and numbers eight swimming pools and 25 water rides. Depending on complexity and speed of descent, they are divided in three categories. The most extreme one is the water slide “Red Pepper.” It is 60-meters long and is higher than a seven-storey house. The huge swimming pool with two cocktail bars and a hydro-massage is situated in the center of the adult area. The children’s ground has a two-level swimming pool with ten breathtaking slides, dry park amusement with passages, bridges and stairs, swimming pool “Shar” and children’s café.

The guests may refill their energy reserves in one of the many fast-food restaurants and small restaurants, serving European and Turkish dishes.

Situated in resort town of Berdyansk, the “Cape of Good Hope” is the Ukraine’s second largest water amusement park. It occupies the territory of about five hectares. The water park is stylized as an age-old knightly castle, whose tall walls hide an oasis of entertainment with numerous pools and mind-boggling slides.

Thirty one ride for both, children and adults, works at its territory. The most visited ones include the 150-meter-long slide “Black Hole” (the descent takes place in complete darkness), “Tenth Wave” (it allows to experience the wave force of nine points) and “Boomerang” (the speed of descent is 10 meters pro second). A spacious 0.5-meter-deep swimming pool, several slides and other water amusements are at kids’ disposal.

Three swimming pools with sea water – one of them has three built in Jacuzzis – are located in the water park's center. The recreation area with beach chairs and VIP-arbours, designed in Turkish style, is equipped nearby. In addition, the “Cape of Good Hope” has bars, oriental café, and pizzeria.

In the evening, foam parties with special show-program take place there.

Situated in the namesake resort settlement in the southeast of the Crimea, the water amusement park “Koktebel” is reckoned among the largest ones on the peninsula. Up to 3 000 people can rest on its more than four-hectare-large territory simultaneously.

The park features 24 water amusements to fit any taste and age. The most impressive ones are “Shore Brotherhood” (three closed interweaving tubes) and the slide “Free Fall,” whose speed of descent is 12 meters per second. Attractions for kids are stylized as famous fairytale and cartoon characters.

In addition, “Koktebel” has seven swimming pools and three hot tubs. Several cafes and a restaurant serve European and Ukrainian dishes for hungry guests. The water park also has its own mini-hotel.

The water amusement complex Zurbagan is situated in one of the Sevastopol's most picturesque corners – at the Victory Park, located not far from the sea. Up to 2 000 guests can simultaneously be on its territory of a little more than two hectares.

The water park offers all necessary conditions for high-quality recreation of children and adults. 15 breathtaking park amusements are installed there. They are divided in three categories: for very little guests (the rides are designed as animals and animation characters), for older kids and extreme 4- to 14-meter-high slides for adults. The latter ones are traditionally the most visited ones and include breathtaking slides “Black Hole,” “Free Fall,” “Bodyslide” and “Kamikaze.”