Kyiv Fortress • Kyiv
The Kyiv Fortress is one of the most important and interesting military monuments in the Ukrainian capital, well-known far beyond the country’s borders. It is the largest earthen fortress in Europe and the second largest earthen fortress in the world. The museum exhibitions housed there and the fortification complex itself are among the most visited places of interest in Kyiv – every year it welco
more Show on map
Environmental Park "Podilski Tovtry" • Kamianets-Podilskyi

Environmental Park "Podilski Tovtry" • Kamianets-Podilskyi
The National Environmental Park “Podilski Tovtry” is situated in Khmelnytsky region not far from well-known Kamianets-Podilskyi. It is one of the country’s most attractive corners, which is famous for its fabulously beautiful landscapes. This unique reserve has long acquired and secured the status of one of the Seven Wonders of Ukraine. This status is guaranteed by amazing combination of inimitabl
more Show on map
Dubno Castle • Rivne

Dubno Castle • Rivne
The Dubno Caste stands on the steep cape near the Ikva River, in the city very center. It is one of the Ukraine’s oldest fortification complexes. Impressing with its majestic beauty and huge historical value, it is a part of the Dubno historical and cultural reserve and is recognized as a true gem of Ukraine’s castle architecture. The Prince Konstantin of Ostroh built the castle on the place of th
more Show on map
Field of the Battle of Berestechko • Rivne

Field of the Battle of Berestechko • Rivne
The national historical and memorial reserve ‘Field of the Battle of Berestechko’ is one of the most meaningful places at Volyn, having a huge historical value. Its attractiveness is based on the amazing combination of perfectly preserved historical landscape, symbolic architecture and multitude of very interesting artifacts. The reserve is situated on the Zhuravlykha Island, not far from the town
more Show on map
Alma Battlefield • Bakhchysarai

Alma Battlefield • Bakhchysarai
One of the very first and the bloodiest battles of the Crimean War of 1853 – 1856 took place at the mouth of the Alma River, not far from the modern village Vilino, in September, 1854. Today, the Alma Battlefield Memorial is situated there. It was created to commemorate the warriors who were killed in that large-scale and ambiguous battle. Historical military festivals and battle’s reenactments, w
more Show on map
Culture and History Center ‘Park Kyivan Rus’ • Kyiv 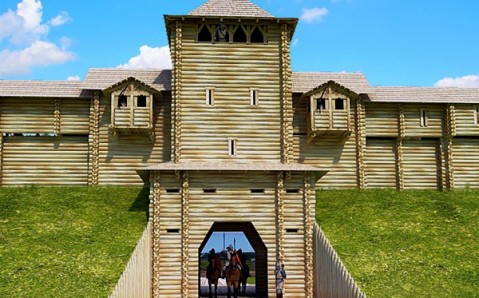 Culture and History Center ‘Park Kyivan Rus’ • Kyiv
Spread out in Kyiv’s picturesque surroundings, the Culture and History Center ‘Park Kyivan Rus’ is a unique project in its nature and scale that has no analogues in Ukraine and even in Europe. It recreates architectural appearance and atmosphere of princely Kyiv with amazing accuracy, taking visitors on a time travel to the Middle Ages and bringing them in the very heart of one of the most influen
more Show on map
Eski Kermen • Bakhchysarai

Eski Kermen • Bakhchysarai
The ancient Eski Kermen is situated on the mountain tableland difficult of access. It is one of the oldest and the most picturesque cave towns in Bakhchysarai surroundings. Due to its imposing age and rare authenticity that allows feeling the atmosphere of antiquity in full, the medieval settlement, whose name means Old Fortress in Tatar, is reckoned among the most frequently visited archeological
more Show on map
Mikhailovskaya Battery • Sevastopol

Mikhailovskaya Battery • Sevastopol
Situated on the northern side of the Sevastopol bay, the large-scale fortification with multitude of loophole windows is clearly seen from the city quay. It is the Mikhailovskaya Battery, one of Sevastopol Fortress’s forts that survived until now. This object of huge historical importance has become the symbol of the hero city. Today, majestic ravelin’s premises are turned into original exhibition
more Show on map
Diorama 'Battle of the Dnieper' • Dnipro

Diorama 'Battle of the Dnieper' • Dnipro
Opened in Dnipropetrovsk on the 30th anniversary of the victory in the Great Patriotic War, the Diorama ‘Battle of the Dnieper’ is the largest diorama in the country and one of the largest in the world. It is the key element of astonishing memorial complex, devoted to Dnieper’s forced crossing and city’s liberation from the fascist invaders, that is situated in the city very heart. The Battle of t
more Show on map
←1 2 3 4 5 6 →  End