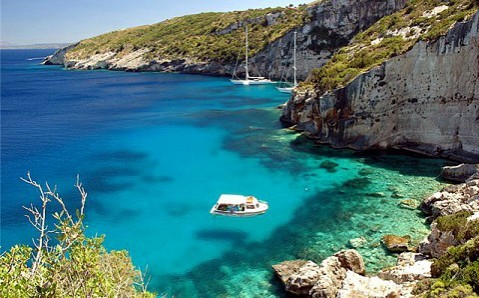 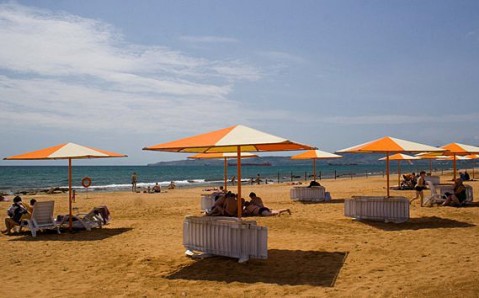 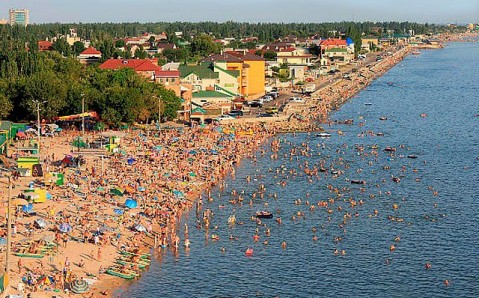 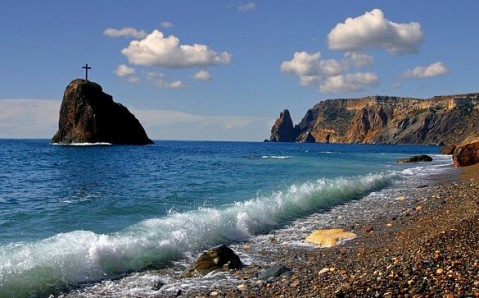 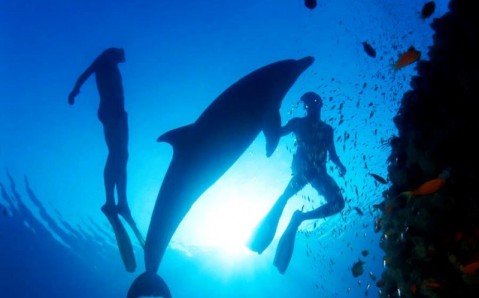 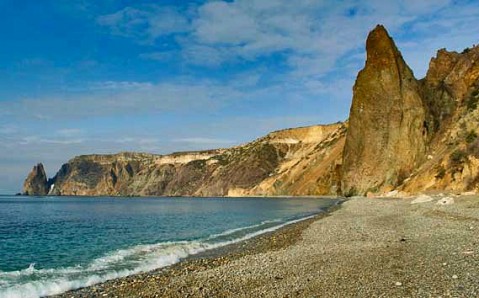 Despite it is still spring on the calendar, Ukraine enjoys true summer weather: thermometers in the southern regions show up to +30 degrees Celsius and water temperature in the Black Sea and Azov Sea coastal areas has reached June level. This means that it’s about time to open bathing season. Having favorable climatic and natural conditions, Ukraine features an impressive number of beaches: sandy and pebble, loud and secluded. They offer plenty of opportunities for calm and active recreation alike. In order to give you some orientation in the variety of options, we’ve selected country’s top five beaches. In doing so, we focused, first of all, on their cleanness, picturesqueness and affordability.

The Yashmovyi Beach is situated in the outskirts of the Cape Fiolent – Crimea’s charming and inimitable corner that captivates by wildlife beauty and romance. Stretching for almost half a kilometer, it is considered to be one of the cleanest and the most picturesque beaches on the peninsula. The Yashmovyi Beach has entered the best beaches list thanks to its transparent water, incredibly beautiful sceneries and special microclimate that makes it the perfect place not only for recreation, but for health improvement as well. Situated far from loud and crowded resorts of the Southern Coast of Crimea, it attracts those who prefer secluded beach recreation.

You can walk down the stone stairs that numbers 800 steps to the Yashmovyi Beach. It runs from one of the oldest Crimean monasteries, the St. George Monastery, located on the top of the Cape Fiolent.

Stretching for several kilometers as a wide stripe, the Zolotoy Beach is considered to be one of Feodisiya’s symbols. It got its name due to unusual golden color of its sand. Local water is clean and transparent, and the seabed is gently sloping, which makes the Zolotoy Beach a perfect place for recreation with kids. In addition, unlike the overcrowded beaches at the Southern Coast’s popular resorts, it offers plenty of room and comfort.

The beach is well-equipped and has the necessary infrastructure: shops, cafes, bars and sports and recreation complexes function on its territory.

The resort settlement Olenevka is located at the western edge of the Tarkhankut Peninsula, which is famous for its fantastic nature. Its wide sandy beach with the most transparent water in Crimea is a perfect place for calm family recreation and for active leisure time alike. The water is well warmed up during the summer. The fans of active recreation have truly incredible opportunities there. Crystal pure sea with picturesque flora and fauna attracts divers to the Olenevka Beach, and the unique breezes attract windsurfers.

The Lanzheron Beach is located in city’s very center – on the place of the former Odesa governor, Count Lanzheron’s summer house – and is considered to be the cleanest and the best-organized city beach. It features soft sand and very transparent water. The beach is equipped with shower cubicles with fresh water; it rents beach umbrellas and chaise lounges, boats and pedal boats. A dolphinarium, where Odesa’s locals and guests like to spend time with kids, is situated at the entrance to the Lanzheron Beach.

Walking along the coastal strip, one can reach another Odesa’s beach – Arcadia.

The Third Beach, which is also nicknamed as the Island of Happiness, is one of the most popular beaches of the resort Berdyansk, situated on the Azov Sea shore. It stretches not far from the downtown offering wonderful views of the Sea Port and the quay. The beach is covered with golden sand, the sea is especially warm and caressing there. In addition, the sea is not deep and, therefore, perfectly suits for recreation with children.

An amusement park works at the Third Beach. It offers entertainment to fit any taste, for kids and adults alike. In addition, it has numerous cafés, restaurants, clubs and entertainment centers. The single disadvantage is that the beach is sometimes overcrowded in high season.